The term “legend” may be overused, but in the case of Sam Young, the description is well-deserved.

The longtime owner and golf professional at Shelburne Golf & Country Club is renowned for his talent at teaching young people. One eye-popping statistic illustrates the point: Twenty-six of Sam’s students have been awarded golf scholarships at universities in the United States and British Columbia. 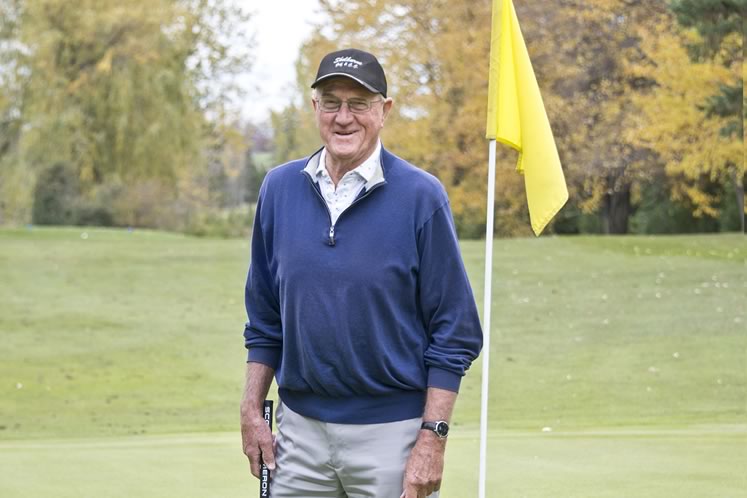 Sam’s long association with the game began when he played golf, along with hockey, in his teen years. Things took a turn when he got a job as a caddy at Oakdale Golf Club in Toronto. Venerated player George Knudson happened to work at the club and took Sam under his wing. “I love to see kids grow,” says Sam, “and I think that goes back to Knudson teaching me.” Later, the young man got another lucky break when he was taught by “Pipeline Moe” Norman, another famous Canadian golfer.

This training helped launch Sam’s extensive professional playing career, which spanned the 1960s and ’70s, and a teaching career that began in 1961. Since then, thousands of kids, and thousands more adults, have passed under his watchful gaze. A particular point of pride is how many of his young students are female. Of 71 kids in the program this year, he says, “we had 26 girls. Some clubs have none.”

Several of Sam’s students have risen to national and international prominence. Shelburne’s David Markle, for example, was on Canadian and European tours, and appeared as a contestant on Big Break Myrtle Beach, a Golf Channel reality series. Other notables include Team Canada veteran Brittany Marchand of Orangeville and former Canadian women’s amateur champion Augusta James. And Mono’s Ranen Oomen-Danckert is a rising star currently burning up courses on a scholarship at the University of British Columbia.

Along with his teaching career, Sam has also built the Shelburne Golf & Country Club into a highly regarded course and practice facility spread over 160 acres northeast of Shelburne. In the 1990s Sam expanded the original nine-hole course to 18. He oversaw the design, and remains hands-on: “I have a backhoe here and if something needs doing, I’m the one who does it.”

Sam’s list of awards in the golf world is extensive. When he was inducted into the Ontario Golf Hall of Fame in 2011, he was recognized as “one of Canada’s most revered teachers.” His most notable award was his induction into the Professional Golfers’ Association of Canada Hall of Fame in 2018.

The 78-year-old credits his success to the fact that he “worked like hell,” though he acknowledges, tongue in cheek, that he’s now slowing down – “I’m only working about 60 hours a week.” But it’s work he plainly loves: “What else am I going to do? I’m not the type to sit around at a coffee shop.”

Sam says his most important role as a teacher is to encourage. “I never use a bad word. It’s my nature anyway.” And his advice for success in golf might be applied to life: “Listen and trust. You never know when it will click. Never give up.”