Monday Night at the Movies: One of our 2019 Local Heroes

For the last 22 years, local cinephiles have been able to see some of the best in independent filmmaking, thanks to the efforts of Orangeville’s Monday Night at the Movies committee – six dedicated volunteers who share their movie-loving ways. 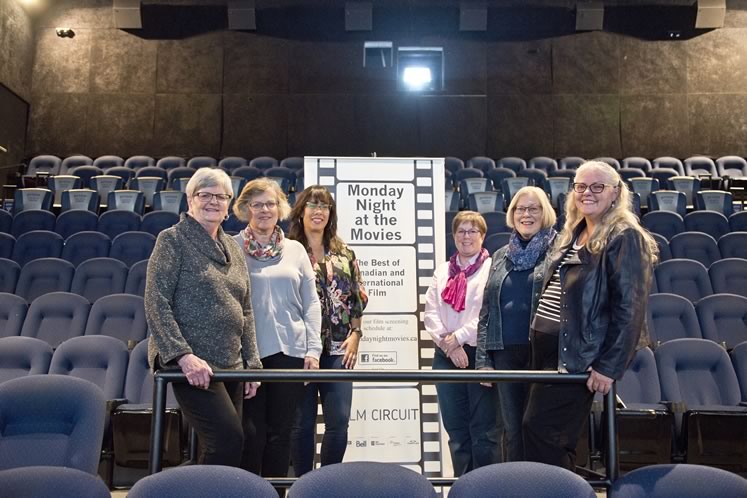 The group searches out and presents Canadian and international feature films that would otherwise not make it to the local big screens. Since its early days at the former Uptown Theatre, popularity of the September-to-May series has flourished. Film nights now draw as many as 600 people to three showings per film at the Galaxy Cinema complex. Waiting in line to get in has become something of a social event in its own right, with friends reconnecting up and down the row.

MNM is part of the Film Circuit, a division of the Toronto International Film Festival. The circuit includes 180 similar groups in 160 communities across Canada. Twice a year the Film Circuit releases a schedule of available films, and the MNM committee sets about the difficult task of choosing what to show here. Their research involves attending both TIFF and Cinéfest in Sudbury as well as other scouting, watching trailers and reading reviews from other groups.

As committee member Andrea Stewart points out, there’s also a practical consideration. To meet the schedule for three showings in one evening, “We have a time limit. It has to be under two hours so we can get people out, clean, and set up to go again.”

While choice of the final lineup is never easy, and there have even been rare complaints from the public when a film screens, committee member Brenda Stephen says, “We don’t always agree, but we try for a balance. Our goal is to bring the best in Canadian and international film to Orangeville, not to make everyone happy.” Brenda, who is often the public face of the committee at MNM events, also puts it another way: “This shirt may not fit everyone.”

Though opinions about specific films vary, the carefully curated mix of period pieces, drama, comedy, Canadiana and documentaries has spawned a loyal audience. MNM attendance figures have frequently been in the top ten for their population bracket among Film Circuit communities across the country.

All proceeds from the nonprofit group go back to the community. Though ticket and pass prices are reasonable, over the years the group has managed to donate more than $65,000 to a variety of mostly local causes. For several years their largest contribution has gone to the Friendship Gardens at Headwaters Health Care Centre. DVDs of all the screened movies are given to libraries in Dufferin and Caledon, and the group supplies commencement prizes for arts students at three high schools.

Though helping the community is a nice perk, Brenda confesses that really, “We’re just six people with a passion for film.” Committee member Sharon O’Donovan adds, “We don’t look at it as work. It’s a first love for all of us. It’s the last thing we’ll give up.”