Mary Balinov: One of our 2019 Local Heroes 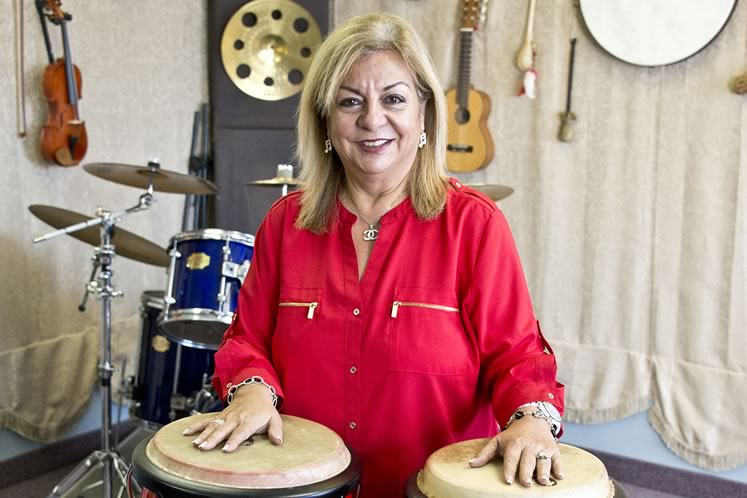 When participants walk into the academy’s Meaghan Zaremba room, “They’re full of hugs,” says Mary. “They’re happy and dancing and start playing, and when the time comes to go we almost have to drag them to get them to leave.”

The room is named after a young woman who came for piano lessons 20 years ago. Meaghan was 17 and despite a severe brain injury, the result of a tragic car accident, she wanted to learn. Since then she has succeeded far beyond expectations, both as a pianist and in life. Meaghan attributes much of her accomplishment to music, saying it changed the way her brain works.

Mary Balinov owns the music academy with her husband, Tisho, a classically trained musician. Inspired by Meaghan to bring music to more adults with physical and developmental disabilities, they opened the Meaghan Zaremba room after they moved to a new building seven years ago, installing an elevator and accessible washroom in the second-floor facility.

Mary, Tisho and their two children, teens at the time, taught the classes, but buying instruments, replacing strings and drumheads and other costs added up, so they turned to the community. “I relied on the generosity of merchants here in Bolton, who would give us whatever they could,” Mary says. “Individuals and service clubs would donate, too.”

“When we became a registered charity, it got easier,” she says. “The board and advisors are wonderful people. They make a big difference.”

Lessons start in the Meaghan Zaremba room, then move to the main music room where they play guitars, keyboards and drums. Some sing, others act out their favourite songs. “When Tisho comes in,” Mary says, “they quiet down right away and listen. When he plays classical music, they close their eyes and let the music wash over them. When he goes wild and crazy with a guitar, they get up to sing, dance and play along with him. It’s their favorite place to be.”

For the Balinovs it remains a family affair. Son Kristian, 24, and daughter Diana, 22, run three week-long day camps for people with disabilities during the summer (fees are subsidized through sponsorships). And Kristian visits St. Michael Catholic Secondary School every Thursday to play music with a group of special needs students there.

As for Meaghan, she’s still taking lessons. She will come in with the groups to start their day by playing piano. Mary says a few individuals enjoy it so much they take private lessons as well. Perhaps that happiness comes from the power of music Meaghan spoke of, or perhaps it’s more about what she once told her mother about Tisho: “Wow, Mom, he teaches me the way he teaches the other kids. He thinks I can do what they can do.”