Nancy Urekar: One of our 2019 Local Heroes

Come snow, sleet or unseasonable heat, Nancy Urekar has hoisted a sign and marched along Broadway in Orangeville every Friday at noon since January. Except for the weekend the cows got out. The herd of cows escaped from Whole Village, the eco-community on Caledon’s Shaws Creek Road where Nancy lives. “I’m trying to live with a smaller footprint,” she says. Sometimes that means a weekend spent recovering cattle. 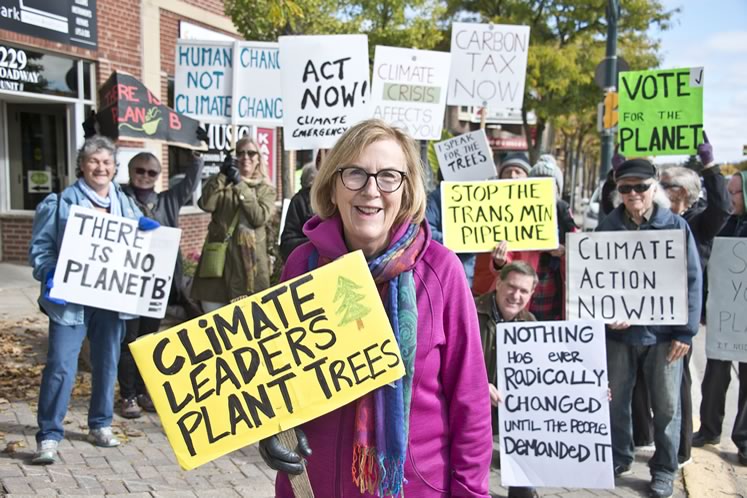 Activist Nancy Urekar has hoisted a sign and marched along Broadway in Orangeville every Friday at noon since January. Photo by Pete Paterson.

Otherwise, she’s on the street carrying a message that warns, “Climate Emergency – We Need to Act Now,” or a variation of it, and chatting with the folks rallying with her, inspiring passersby to stop and talk, honk in support, or just consider the state of our environment. “If this makes people stop and think, ‘Oh, maybe this is important,’ then it’s all worth it,” she says.

The rallies started “in support of Greta,” says Nancy, referring to Greta Thunberg, the 16-year-old Swedish girl whose climate strikes have spurred hundreds of thousands to follow suit. The largest rally in Orangeville was on September 20, drawing some 300 people to march along Broadway. It was co-organized by Nancy with Climate Change Action Dufferin-Caledon and the students of Orangeville District Secondary School.

A lost run for the Green Party in 2015 only cemented Nancy’s belief she could better motivate people outside politics than in. The following year she cofounded the Climate Action group. “A few of us got together and said, ‘What can we do? How can we influence and make change?’”

To say the group has been busy ever since is an understatement. Among other things, it hosted a town hall for a Canadian Green New Deal, adding the ideas shared there to a national database. It held all-candidate debates about environmental issues in the last federal and municipal elections. It continues to lobby local municipalities to ban plastic bags, so far without success, but it did persuade Orangeville to sign the David Suzuki Foundation’s Blue Dot declaration supporting the human right to a healthy environment. And it puts on the Fast Forward eco-film fest, inspired by a similar effort in Erin and now in its fourth year.

Nancy’s green streak started in the late 1980s when her children were young. Thinking she was feeding them well, she says, “Instead of junk, I’d give them apple juice.” But in 1989 it was reported that a controversial chemical called Alar, widely used on apple crops, left a residue linked to cancer, with young children especially susceptible.

“That’s when I really started to wake up and be aware,” she says. “We’re destroying our kids.”

Later, as a manager at Harmony Whole Foods in Orangeville, she dove deeper into organic food systems, putting environmental action and agriculture in one picture.

Now she is a real estate agent by day and environmental advocate the rest of the time. “Climate change takes a lot of hours of the week, but it’s important,” she says. “Out of all of this, I hope people can see that. This is huge. This is an emergency.” 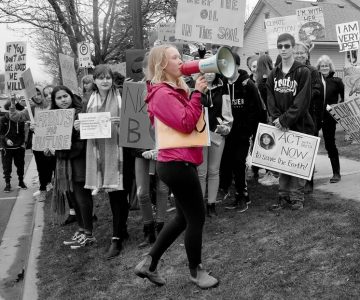 Climate Change and the Young

“We the young have started to move.” Youth here and around the world raise a battle cry for action on climate change.