Andrew and Juli-Anne James: Two of our 2019 Local Heroes

All the arts. All the time. For all the kids. In the vision of Andrew and Juli-Anne James of Shelburne, kids from four to 17 should have a place to express themselves creatively – through painting, sculpture, music, dance, writing, video, even circus arts, baking and coding – and they’re working to make it happen. 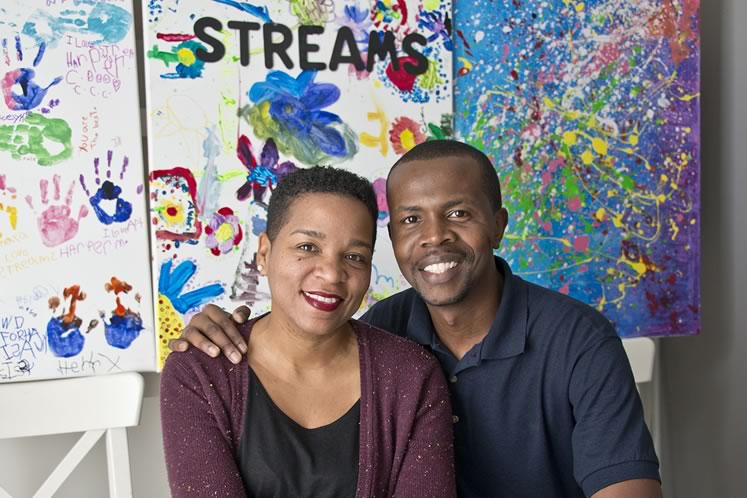 Andrew and Juli-Anne James are the arts boosters behind the Streams Community Hub for kids in Shelburne. Photo by Pete Paterson.

In high school, a teacher channelled Andrew’s class clown energy into musical theatre. Andrew was reluctant, but “eventually I gave in,” he says with a laugh, “so he’d stop bugging me.” He not only had fun and enjoyed modest success – eventually promoting Christian music and launching Toronto’s successful Drumoff competition – but along the way he realized his passion was to give young people the same opportunities he’d been given.

Andrew and Juli-Anne met in a youth program at Kingdom Covenant Ministries in Mississauga where Andrew held a monthly talent show called The Jam. “When I was at York University, I used to write and perform poetry,” Juli-Anne says. “A friend told Andrew he should get me for The Jam and he did.” After they were married in 2009, Andrew worked as a youth pastor at the Islington Evangel Centre until the couple moved to Shelburne in 2015. At the time, Juli-Anne was pregnant with the third of their three daughters.

They found the rapidly changing town offered plenty to do in sports, but not in arts. They both work from home – Juli-Anne in human resources and Andrew with his own clothing company – and they set out to make creative arts more available. “Andrew is the heart and I’m the brains,” Juli-Anne says. “I bring structure to the ideas.”

In the summer of 2017 they organized four weeks of summer camp that offered videography and dramatic arts, along with “Sing Dance Play” for younger kids. Demand has continued to grow along with significant community support. They have added a March Break camp, doubled the number of programs and aim to present 12 streams over six weeks next summer. Subsidized fees and full scholarships are available to ensure inclusion for all kids.

The charity’s name, Streams Community Hub, embodies their overriding goal. “Streams connect lakes and rivers to bigger bodies of water,” Andrew explains. “Streams Hub brings people together, connects them to each other and to their passion, helping them find their greater purpose through the arts.”

Camps are held at Centennial Hylands Elementary School in Shelburne, but the couple’s long-term dream is for the non-sectarian, registered charity to raise enough funds to have its own facilities so they can expand to include PD Day camps, as well as after-school and weekend programs that could get parents involved. They even have dreams of creating a network in smaller centres “because rural communities are often underserved.”

“We’re building a community. Kids come in on Monday and they’re all shy,” says Juli-Anne, “but by Wednesday everyone’s jumping around having a great time.” Kids have so much potential but many never have the opportunity. “It doesn’t mean they’ll be a Picasso,” says Andrew, “but maybe they learn discipline, how to focus, innovate, think creatively.” And, of course, make new friends.