Sharon Morden: One of our 2019 Local Heroes

It all started with Petey. The blind cat with matted fur was the last of a colony outside Pete’s Donuts in Shelburne. Sharon Morden and a couple of others would check in on the feral cats, feed them, and fetch kittens from the wooden box they’d made home.

Eventually, the colony had to move. 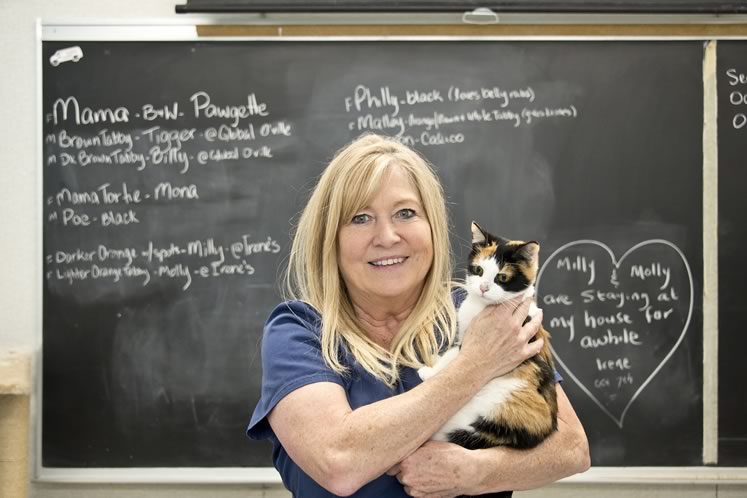 Sharon Morden and Raccoon (since adopted) of Feral Cat Rescue in Melancthon. Photo by Pete Paterson.

After two years in Sharon’s care, Petey finally warmed up to being petted. And he’s acquired a lot of new feline buddies. In 2012 Sharon started Feral Cat Rescue, a shelter that can now house up to 40 cats. Humane societies generally don’t have space to accommodate feral cats, and the cats aren’t yet ready for adoption. Feral Cat Rescue gives them time to socialize, and ideally find a home.

Sharon came by her love of animals as a child. “I grew up with alligators,” she says. Three alligators, rescued by her father, lived in her family’s Toronto basement, which was outfitted with a landing area and pool. Along with the usual dogs and cats, the family also had a raccoon that flooded the bathroom by turning on the tap, and a turkey that had fallen off a truck on the 401 en route to Thanksgiving dinner and watched evening television with them. So, with the help of Petey, it wasn’t entirely surprising that Sharon’s basement became a makeshift shelter.

But over the years it became less makeshift – a problem for her home business, Sharon’s Cakes. A commercial kitchen upstairs wasn’t conducive to an animal shelter downstairs. So Sharon put her successful business on hold and took a job with the Upper Credit Humane Society, advancing to shelter manager and continuing to take in feral cats at home. Eventually, her neighbours took issue and complained to the municipality. As of October 2017, the cats were out.

Undaunted, and with support from the community, Sharon was able to house the cats in a barn for 19 months. Then Kim Goddard and Mike Belanger offered a portion of their land in Melancthon. Sharon acquired two school portables and this summer, helped by her boyfriend and others, joined them and created intake, isolation and exam rooms, as well as a spacious sanctuary room where the cats can roam among towers, cushy furniture and toys.

With the assistance of about 15 volunteers, donations from local pet stores and individuals, and a modest grant from Shelburne for feline control, Sharon manages feeding, litter removal, routine medical care and making sure all the cats have daily human contact. Broadway Animal Hospital provides discounted spay/neuter services. Fundraising is underway to erect a tennis court-sized open-air enclosure, along with a well and septic (water currently has to be carried in).

Sometimes Sharon’s cat rescue efforts take a different turn. A couple of days after fire destroyed a multi-unit home in Shelburne in September, Sharon heard that three cats had been left inside. The fire chief gave her and a few volunteers an hour to enter a smoke-blackened apartment to find them. Two were huddled under a bed, but it was only by ripping apart water-logged furniture that Sharon found the third, which had wedged itself up into the back of a sofa. All three were reunited with their grateful owner.

Visitors are welcome to attend the grand opening of Feral Cat Rescue on November 30. Details at feralcatrescue.ca.