Lately I’ve been thinking a lot about noise. About how hard it is to get away from the cacophony of daily life in these hills. There may be fewer airplanes during these Covid days, but it seems there are a lot more loud motorcycles and racing cars than ever before. Noise has become my bugbear, often an irritation, sometimes a loathing.

You might wonder what this has to do with kayaking. Plenty, as it turns out. It has to do with finding a welcome respite from noise by spending a soft, overcast Wednesday morning on Island Lake, seeking peace and solitude as Orangeville’s incessant hum of traffic fades into the distance.

Located on the east side of Highway 10 across from Orangeville’s crop of big box stores, the 329-hectare Island Lake Conservation Area is mostly a 182-hectare body of water. The lake is a reservoir formed when two dams were built in the 1960s to control flow in the Credit River, but these origins aren’t evident from a kayak, especially on a cloudy, tranquil morning or with a friend in another kayak on a still, blue-sky evening.

From tip to tip, Island Lake is about 4 kilometres long. A recreational kayaker could cover this distance in about an hour, but I knew the temptation to explore could turn an hour into two or three.

I prefer kayaking just after dawn, but the park doesn’t open for rentals until 8 a.m., so it was a quarter past the hour by the time I zipped up my PFD, slid my rented, very adequate and stable, orange plastic kayak into the water, and breathed a sigh of relief. Home. I was at home in the boat, floating on an expanse of open water. I was free of land and would soon be free of my bugbear, or so I hoped.

I decided to seek out the pair of loons park staff had told me live on the reservoir. I nosed my agile kayak through the reeds and alongside the lake’s small islands and into its hidden channels. As I did, a pair of trumpeter swans caught my eye. Even from afar they are magnificent birds. Rebounding from near extinction, trumpeter swans can measure nearly two metres long and weigh about 12 kilograms, making them twice the size of Canada geese. We are more accustomed here to seeing introduced mute swans, with their orange bills, but there’s a growing population of native, black-billed trumpeters on the Great Lakes and, it seems, on Island Lake.

I cozied up to the shoreline thick with bulrushes, which swayed gracefully in the breeze, hopeful a muskrat, mink or deer might reward my sleuthing. Families of mallards and American black ducks parted as I glided by as silently as my paddle would allow. Kingfishers hurried overhead, Canada geese preened in the shallow water and then, in the distance, came the mournful, iconic call of a common loon. It drew me on, deeper into the lake, farther from the now dampened, but still evident, drone of Highway 10 traffic. I hadn’t escaped yet.

Kayaking is a solo pursuit for me. I get into the rhythm of paddling, my arms, shoulders and core working in a figure-eight pattern, making minute corrections with every stroke to keep my boat straight. I’ve become practised enough that I’m no longer conscious of these movements. But kayaking can be social too. Kirsten Ball found it a good alternative to a coffee shop.

As Covid-19 eased its grip, Kirsten and a friend exchanged a café meet-up for a paddle on Island Lake. They lowered their kayaks into mirror-like water as the sun dipped toward the clear blue horizon. “We were the only people on the lake,” Kirsten recalls, “but we saw two loons.” 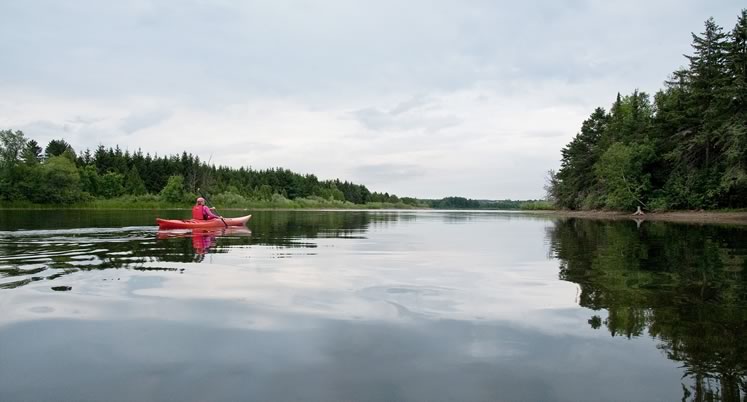 On the border of Orangeville, Island Lake offers a welcome respite from the noisy clatter of daily life. Photo by Rosemary Hasner / Black Dog Creative Arts.

Like me, Kirsten took to the water to get away from the noise of everyday life. Her memory of that evening is of exchanging thoughts and ideas with her friend. “In a coffee shop we mostly gossip,” she said. “Out there we had a more intimate conversation.” Peace is what she recalls.

As I neared the far end of Island Lake, having passed under one of the boardwalks that span the reservoir, the mixed hardwood forest closed in on the shoreline. I noticed a pair of channels at the back of the last bay and coaxed my kayak forward between dinner-plate-sized lily pads in hopes of continuing farther upstream. I felt like an explorer within reach of the source of the Credit River. But I didn’t get very far before becoming grounded in thick mud, my paddle draped in reeds, mosquitoes buzzing in my ears.

Reluctantly I turned back and was soon into the open water where a stiff breeze had picked up. Feeling invigorated, I put my head down and paddled hard, directly into the wind until my shoulders and core began to complain. When I let up I’d travelled halfway back to where I’d begun well over an hour before. It was then, and only then, that the first sounds of traffic again imposed on the blissful silence.

Unlike some sports, kayaking is fairly easy for beginners. Here are a few things to consider before heading out.

You can rent kayaks at Island Lake Conservation Area for $20 an hour or $50 a day, plus a $200 deposit and the entrance fee of $5.75 for adults, $2.65 for children and $4.43 for those 60 and older. Or launch your own kayak for $8 plus HST and the entrance fee. Credit Valley Conservation supplies PFDs (personal flotation devices), paddles and safety equipment for rental kayaks. Check the CVC website for more information.