A thoroughly modern treasure hunt is a surefire way to get kids busy outdoors.

One of the great things about kids is that they remind adults of the pure joy of things such as seeing all the presents under the tree on Christmas morning or riding your bike down a really big hill – or a treasure hunt.

So when I read that geocaching is the “biggest treasure hunt in the world,” I decided to borrow some kids. I needed them to help me understand why more than 360,000 geocachers in nearly 200 countries have hidden upwards of three million geocaches. That’s gargantuan!

I googled “geocaching” and up popped geocaching.com. This great, child-friendly website had everything I needed to get started – everything, that is, except some kids! I read through the instructions and learned about the etiquette of geocaching. A couple of really good, child-friendly videos helped a lot. Then I downloaded the free version of the geocache app to my phone.

When I logged in, my location showed up as a moving blue dot, similar to what you see on Google Maps. It was awash in a sea of green circles marking geocaches. These dots didn’t move. In the area from Terra Cotta through to Highway 10 near Orangeville, dozens of these concealed treasures were waiting to be discovered by me and my kids, once I found some. I felt as though I were about to embark on a clandestine operation – first to find some kids, then to locate the treasure.

I clicked on a green dot close to my home and up came a description of a geocache named “Dancing on McClaren” [sic]. It was 2.8 kilometres away, the difficulty in finding it was 1.5 on a scale of 1 to 5, and the geocache would be some kind of waterproof container that would hold a scroll on which I could add my name to those of others who have also found the cache. The container might also contain small treasures such as a figurine or a toy car. The etiquette of geocaching is that if you take a treasure, you must leave behind something as good as, or better than, what you found. Geocaching is about trading, not taking.

The app also explained the geocache had been placed by “dancer man” on 2016-07-10 and included a list of all the people who had ever found it. Finally, there was a hint to make it easier to locate. It read: “Hollow there … come and find me!”

Next up were some kids. Fortunately, my nephew, his partner and their three sons, aged 12, 9 and 6, were also intrigued by my description of the biggest treasure hunt in the world.

On a cold day in May, we convened at the corner of Forks of the Credit Road and McLaren Road, and I gave Leif, Waverly and Xavier a brief description of what geocaching is about. The boys focused on “treasure,” and the eldest, Leif, caught “hollow.” “What’s a hollow?” he asked. “It’s likely a depression in the ground,” I suggested. “What will the cache look like?” Leif wanted to know. “Beats me,” I said. “Let’s find out.” 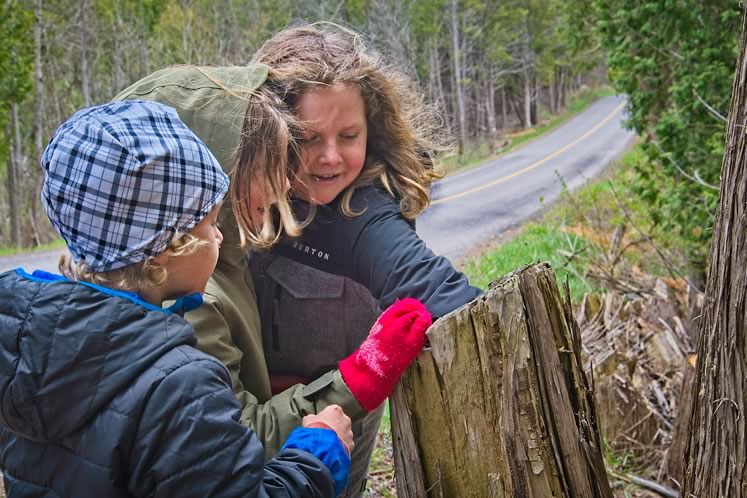 From left, brothers Leif, Waverly and Xavier discover a cache in a hollowed out tree trunk. Photo by Fred Webster.

Following the blue dot on my phone, we came to where the green dot indicated the geocache was hidden. We were in dense cedar woods with some depressions on the forest floor. “It must be in that hollow,” I told Leif, pointing to one of the depressions. Before clambering down the bank (spoiler here), he glanced into a hollowed-out tree trunk. “There’s something blue in here,” he said casually. 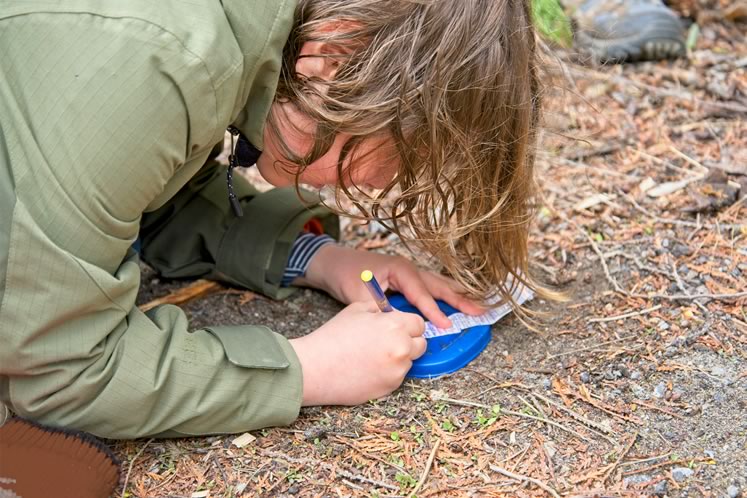 Waverly adds his name and the date to the cache’s log. Photo by Fred Webster.

And sure enough, tucked inside the hollow was a small plastic container. Leif fished it out. It contained a few pieces of sodden paper and a small ziplock bag with something in it. “Take it out! Take it out!” Xavier screeched, stamping his feet with glee. Waverly stared, mouth open, as his big brother withdrew a small scroll. Unfurling it, Leif announced it was a list of all the other people who had found this geocache.

Fortunately, the geocaching website had instructed me to take along a pen, so the boys added their names.

Buoyed by their find, they were keen to try again. We drove up to Charleston Sideroad and Willoughby Road, where the geocache app told me we’d find “Signs, signs. Everywhere signs.” This time it would be a micro geocache and the hint read, “Located around knee height.”

When I was the first to spy the marble-sized micro-cache, I had to stifle my Xavier-worthy screech lest I give away its location. Guess the kid in me lives on. I let the boys explore for a bit, giving them hot-and-cold directions. It was Leif who remembered it had to be near a sign, though it was Xavier who found the treasure. He let out another whoop.

We found two more geocaches, both in Caledon village. One had some treasures in it, including an Egyptian Lego helmet. Xavier, it turned out, is Lego-obsessed. Wide-eyed, he asked, “Can I take it?” I explained the rules of trading and wordlessly thanked geocache.com for recommending I take along some trinkets to trade.

Before saying goodbye, we agreed to create our own geocache and hide it nearer to where the boys live in Belfountain. The kids’ dad, Sam, suggested it would be great if it could be on a trail rather than by a road. I concurred. As they drove off, Leif returned my wave and Waverly nodded, but Xavier was totally engrossed in his new piece of Lego.

Start your own geocaching fun

Visit geocaching.com for more information. This excellent website is designed for children. It explains how geocaching works, includes blogs, events and videos, and sets out guidelines, such as respecting private property. It also introduces visitors to the international community of geocachers. It’s easy to see how some people, children and adults alike, could be delighted by the many facets of geocaching.

The geocaching app is available on mobile phones. The free version allows a limited number of geocaches. To gain access to all geocaches and other features, there is a pay option ($9.99 US for three months or $29.99 US for a year).