Putting the Cart After the Horse

Soon we’re flying up the road. Had I worn a silk scarf, it would have been streaming out behind me.

Neatly stacked English saddles, smartly hung snaffle bridles and oodles of unfamiliar harness line the walls of Beaverwood Farm’s tack room. Ribbons of all sizes and colours decorate the spaces in between. Some are enormous tri-coloured championship rosettes, others small pony-club versions – all take me back to my youth and my family’s tack room. But more than the equestrian paraphernalia, it’s the smell that brings on the memories. It’s a musty and thick combination of damp leather, sweat and saddle soap.

Until university, boys and shaky nerves came between me and combined eventing, I spent hours in the saddle – but I had never steered a horse from behind. Kirsten Brunner, who owns Beaverwood Farm near Hillsburgh, has agreed to introduce me to the world of driving. Kirsten coaches riders and drivers of all ages, while also breeding, training, competing with and selling horses.

“Combined driving, which is like eventing in a wagon, that’s my sport,” she explains. She was just home from Bromont, Quebec, where she won the intermediate single-pony division at the only Canadian combined driving competition sanctioned by the Fédération Équestre Internationale, or FEI.

Combined driving is a gruelling three-phase team contest that takes place over three days. The first phase is dressage, during which horse, driver and carriage get all decked out and perform a set pattern of precise manoeuvres, reminiscent of the compulsories that figure skaters once completed. Day two is the marathon, an endurance phase that tests the horse’s and driver’s courage, skill, fitness and speed. The long course includes obstacles, such as water hazards, tight turns and hills.

The final day brings the obstacle-driving compe­tition. This timed event requires horse(s) and driver to show that they are not too pooped to negotiate a tricky course that passes through as many as twenty pairs of cones with balls balanced on top. Hit a cone and dislodge the ball, and you draw penalty points. Categories include single rigs, pairs and teams of four, and in each category, there is a pony and a horse division.

Kirsten’s plans for me tend more toward pleasure driving, which suits me for my inaugural class. But first, we must harness Beaverwood’s Astilbe, a cross-breed and seasoned veteran who is our “mount” for the day. In no-nonsense fashion, Kirsten goes through each piece of harness, explaining how it fits. She trusts me to fasten buckles and allows me to put the bridle on, though she checks everything to make sure it’s done right.

We take Astilbe to the indoor arena, where I’ll start out behind her on foot. “Driving involves a combination of verbal commands, pressure on the reins and the whip,” Kirsten says. She demonstrates, hands over the reins, and I fall in behind Astilbe. Using my voice rather than leg aids, I feel as if I’m speaking a foreign language.

In a few minutes, Kirsten takes over. She massages Astilbe’s rump lightly with the whip and calls out a few commands. Astilbe’s ears perk up. She arches her neck, rounds her back and comes “on the bit,” which means she’s really engaging her powerful rear end. The transformation from cob to show horse is quick and impressive.

Then it’s time to place Astilbe between the shafts of an old-style wooden two-seater carriage. Painted a soft yellow with black detailing, the carriage would have been used to carry people into town to pick up groceries. Kirsten points out that it includes a braking system for going downhill.

I learn how to attach the carriage to Astilbe’s har­ness, and we climb aboard the surprisingly springy vehicle. It feels nothing like riding a horse.

“Trot on,” Kirsten tells Astilbe, and we take a few brisk spins around the indoor arena, passing be­tween orange cones that have been set up in pairs. One pair is set up so that they are only a metre farther apart than the wagon wheels. But when I remark on this, Kirsten laughs off my comment. At her level of competition, the cones are a mere 22 centimetres wider than the carriage wheels.

We slow to a walk, and Kirsten presents me with the reins as we head toward the two close cones. “Do I have to go through those?” I ask, my voice strained. She advises me: “Don’t look down. Look well past the cones to where you want to go.”

And after a few tries – only once does Kirsten have to grab the reins to prevent a cone-carriage collision – I start to get the feel of it.

Soon, it’s time to turn the reins over to Kirsten, who guides Astilbe outside and onto the road for a short outing. I ask what it would involve to learn this sport. The first thing, she says, is to get some instruction. “After ten lessons, you’ll be driving a horse up the road just like this.”

The morning is warm and muggy, and as we turn right onto the newly gravelled road at the end of her driveway, an enormous gravel truck barrels toward us. We wave, and it slows down. Astilbe remains calm, the truck passes, and we carry on at an active trot. I feel as if we truly are on our way to pick up provisions in town.

When we come to a gentle incline, Kirsten asks Astilbe to move on. Soon we’re flying up the road. Had I worn a silk scarf, it would have been streaming out behind me. All too soon, it’s time to go back. The carriage turns on a dime, as Astilbe does some fancy crossover steps to get us headed in the opposite direction.

As we trot back, I ask Kirsten if she knows Jack Braithwaite, the only other driver with whom I’m familiar. “Jack Braithwaite gave me some equipment and some lessons,” she says.

Jack’s driving skills and Cormack’s enthusiasm put Caledon on the international driving map during the “Classic” period, when competitors came from everywhere to participate in the annual event. “In 25 years,” says Jack, “we sort of won everything at one time or another.”

Jack still drives competitively, but with Cormack in poor health and the carriage collection going up for auction this fall, he now spends much of his time helping out at what has become the Tralee Wedding Facility. Most weekends during the summer, you can find Jack hitching the horses to Tralee’s landau, an elegant four-wheeled convertible carriage, and transporting nervous brides between the marriage chapel and reception area. 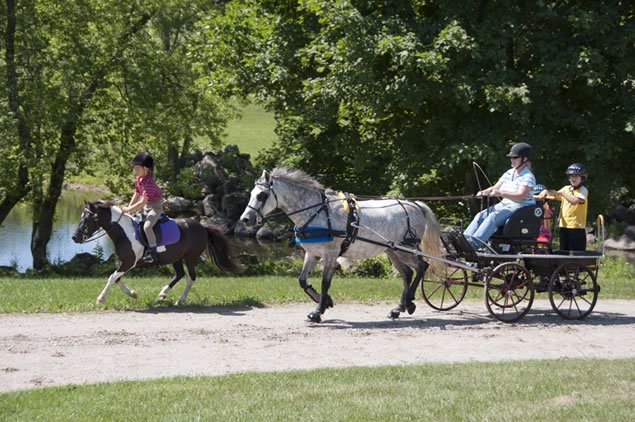 Kirsten Brunner’s daughter Kilby and her pony Starlight ride along while friends Tommy and Tara catch a ride with Kirsten and Raindrop at the scenic grounds of the Tralee Wedding Facility in Caledon. Photo by Pete Paterson

Kirsten explains that many equestrians who can no longer ride, for one reason or another, switch to driving. They may take up combined driving like Kirsten (and the elderly Prince Philip) or they may choose pleasure driving. Either way, there are lots of local competitions where they can compete, watch and even volunteer.

Bill MacGillivray, who lives near Limehouse, is pres­ident of Drive Canada, the organization that represents combined driving, pleasure driving, recreational driving and draft horses. An enthusiastic driver, Bill is also the father of 26-year-old Courtney, whose success in combined driving has earned her a spot on Canada’s equestrian team. Always on the lookout for new par­ticipants, Bill says, “If people want to get involved, have them give me a buzz.”

Back at Beaverwood Farm, Kirsten tells me that she was the first Canadian woman to compete in the world championships of combined driving, and that she’s the only North American woman to breed, raise, train and compete in World Cup events. And if things go as planned, Kilby, her seven-year-old daughter who is already an acknowledged “horse-freak,” will help attract others whose talents and inclinations make them interested in harnessing, rather than tacking up, an equine friend.