On a farm with fencerows and five acres of bush, wood is basically free.

We have an old neighbour named Oscar who claims that up to the age of 12 he thought his name was “Get Wood!” He showed me the side of the house where he and his father piled cordwood in four rows six feet high every fall. That was generally enough to get them through till spring, but he still remembers hauling a dead tree up to the front yard one April when they misjudged the length and ferocity of a Canadian winter.

Like a lot of the neighbours, Oscar gave his cookstove away to a hunt camp 20 years ago and installed an oil furnace in the basement. He put a little propane stove in front of the bricked-up fireplace and hung the axe over it as an antique decoration. Virtually all of the neighbours did the same, but my romance with wood heat continues to burn steadily, outlasting all other flirtations. I had a few flings with electric baseboards, air-to-air heat pumps, ceramic heaters and high-efficiency this and that. But they all proved to be expensive disappointments and none of them handed out the fierce, bone-warming heat of a masonry stove feeding on chunks of dry maple and beech.

On a farm with fencerows and five acres of bush, wood is basically free. Oscar himself would say, “It’s like money from home.” Of course, you don’t count the wear and tear on the chain saw, the tractor or the truck, and never mind the weeks of bone-headed labour to haul three bush cords up to the house. What else does a writer have to do? 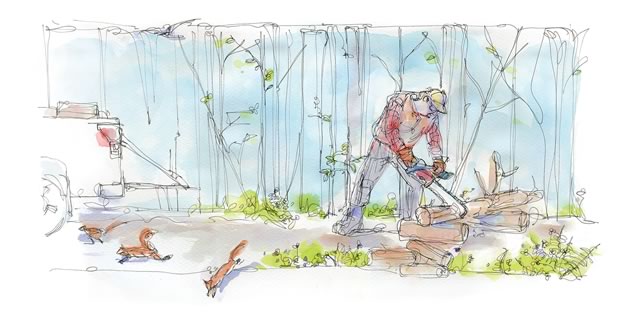 Whenever I suggest a day in the bush I hear a chorus of “Woodsman,
spare that tree! Think of the biomass!” Illustration by Shelagh Armstrong.

My sons are both keen outdoorsmen. They’ve been handling wood for the stoves here at the farm since they were toddlers, but they don’t go out to the bush with me anymore if they can avoid it. If they do pick up an axe it’s more likely to throw it at a target on the barn wall than use it to knock slabs off the outside edge of a block of maple. If I press the issue, they say, “You shouldn’t be chopping down trees, Dad. Think of the biomass!”

I think of biomass all the time. Sometimes I wish public schools taught mathematics with the same effectiveness they teach recycling and endangered species. Whenever I suggest a day in the bush I hear a chorus of “Woodsman, spare that tree! Think of the biomass!” And they go back to their Xboxes to whack some more Orcs.

Biomass is humanity’s oldest fuel and it still makes up something like 75 per cent of the world’s renewable energy, three times as much as solar, wind and all other renewable combined. I know it’s bad for the air, but at least it’s CO2 neutral, isn’t it? Wood only releases the carbon sucked up while the tree was growing, so the net effect on the climate is zero.

“Not so,” they say. “That’s just bad accounting, Dad. The tree grows over 75 years and you burn it up in a few weeks. Large-scale biofuel projects have been a complete disaster for the planet.”

But I’m not large scale. I’m a dot, an insect, a tiny insignificant fleck of dust, and the forest hardly notices I’m here. Besides, I like it. I enjoy the feel of wood chips flying out of the saw, the smell of dead leaves and moist earth underfoot. My excuse for going to the bush may be the firewood, but I’m also there to sit and visit in silence with the masses of purple violets and pink herb Robert. Like the coyote I only go after the sick and the wounded – trees with a bad lean or a rotten centre, dead elms and desiccated ironwoods shaded out by the tall basswoods. These are also the most dangerous to fell and they test my nerve and make my heart race, which is always a good thing for a man my age. I lie awake the night before, plotting the precise angle of the cut and the shortest line of escape.

Songwriter Bruce Cockburn mangled an old philosophical riddle when he sang, “If a tree falls in the forest, does anybody hear?” But his question is still relevant. In my experience, if a virtual tree falls in conversation on the Internet, thousands will hear and object violently. But when a real one crashes in the bush, chances are you will be the only one present and you will have to lug it home all by yourself.