Letters published in the Winter 2015 edition of In The Hills magazine. 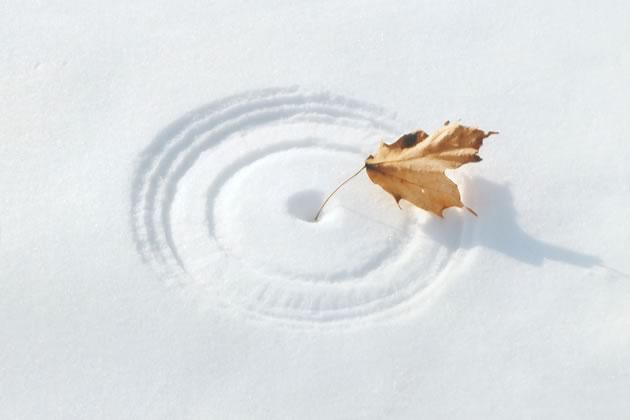 Last January I noticed a dead maple leaf stuck in the snow by its stem. The wind was swirling it clockwise, then counter-clockwise. As I got closer I noted that a unique pattern or snow sculpture had been created. I was able to record the phenomenon with my small digital camera. (The photos are untouched.)

My friends were intrigued by these images and made comments such as, “This might explain crop circles in Europe,” and “Nature must have taught the early potters how to design their plates and saucers,” and “Is this the original inspiration for the tops and bases of the ancient Greek and Roman columns?”
Don Armitage, Inglewood 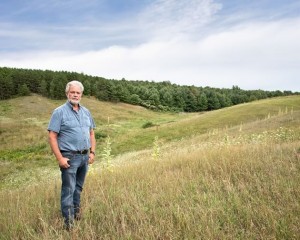 Sheep farmer Doug Cox says filling the gullies on his property to increase his herd and improve his profits is a normal farm practice. But in the absence of regulatory oversight, neighbours fear soil and water contamination. Photo by Pete Paterson.

I feel for Doug Cox [“How Clean Fill Became a Dirty Word” by Tim Shuff autumn ’15], but getting paid to take fill only means you are taking on someone else’s problem. What is stopping Cox from buying real fill from a landscaping firm? If he were to accept fill, he would also be making a very tidy sum of money.

Living across from a huge fill project, Tottenham/Volk Aerodrome, for the last three years has given me the experience that fill brokers are rich and ruthless. They are in to dump, make money and they don’t care about the legacy of contamination they leave behind.

There is an error in the story about aerodromes being federally regulated with respect to fill. Fill operations at aerodromes must comply with municipal bylaws, period [according to a statement by Simcoe-Grey MP Kellie Leitch].
Kathleen Wilson, Caledon

The issue of whether aerodromes, as federal undertakings, can be regulated by municipal fill-bylaws was settled by the Court of Appeal for Ontario in Burlington Airpark Inc. v. Burlington (City), 2014 ONCA 468 (CanLII).

The purpose of the fill bylaw was to regulate the quality of fill to prevent the use of toxic or contaminated fill in municipalities. The bylaw was not an attempt to regulate aeronautic activities. Burlington Airpark was required to comply with the City of Burlington’s fill bylaw.

Although aerodrome operations were found to be regulated by municipal fill bylaws, there are still many activities – farming, rehabilitation of lands – which require clarification as to whether municipalities have the authority, and jurisdiction, to regulate these activities’ fill operations.
Stephanie G (web comment)

Why not apply for a permit to grade the hills down into the gully?
Barney Beckett, Caledon Village

We love Tony Reynolds’ article about the expressive arts programs at Community Living Dufferin [“Expressive Arts” autumn ’15] and are deeply touched by the beautiful feature on our daughter Sarah Godfrey. She herself is beyond thrilled. We’ve come such a long way from her assessment 30 years ago at Sick Kids when we were told she would never read, write or express emotion!

Tony’s writing is sensitive, respectful, inspiring and insightful. “Art from the Heart” describes his work, too.

Thank you for highlighting the wonderful work of Jane, Liz, Jenee, Jodee, Pete, Joyce, David, and the many other creative and committed people at CLD and Theatre Orangeville who make magic with our daughter and her friends.
Leslie and Glenn Godfrey, Mono

Thank you to Tony Reynolds for his article “Expressive Arts.” He captured both the spirit and the joy of working with people that CLD supports. Bringing together professional artists, CLD support staff and artists with developmental disabilities is win/win/win, inspiring growth in everyone involved. Theatre performances, photography shows and art sales bring the artists’ talents to a wider community.

It is my hope the article will inspire other communities and organizations to embrace the potential of celebrating our common humanity through artistic expression.
Jane Ohland Cameron, Creative Partners on Stage Drama Troupe

Thank you (times a million) for giving us such a great write-up in “Must Do” in the recent autumn issue. Spirit Touches Art, Touches Spirit is excited to promote its second year and I was thrilled when I had several phone calls and emails telling me, “We made it. We got in In The Hills.” This is a tremendous endorsement for us.

Don’t you just love Dufferin and the Headwaters region?! I do.
Ann McAlpine, Shelburne 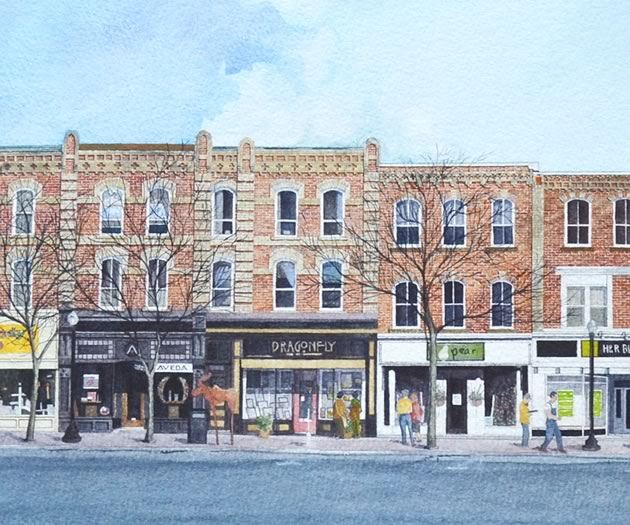 This Broadway streetscape was painted by Orangeville artist Alex Lennox. A few storefronts have been updated for this publication. The original triptych measures 8½ feet long and 16 inches high, and took the artist 450 hours to complete. It is currently exhibited for sale at Dragonfly Arts on Broadway.

The article on Orangeville’s Broadway by Tralee Pearce was excellent [“Broadway Revival” autumn ’15]. It is heartwarming to see the street becoming economically viable again and so attractive after so many setbacks. The innovative way of linking historic buildings artistically added to the enjoyment.

Although never a resident, over many years I have been drawn in to various concerns by friends and acquaintances – usually regarding the loss of important landmark buildings, which then lead to ugly gaps in the streetscape, temporary “dumping” grounds and haphazard parking lots.

This led some years ago to an invitation by a local ladies’ organization to speak on the mainly Victorian and Edwardian architecture of the early commercial and community core of the town.

It shortly became obvious from the audience reaction that rarely, if ever, had they paid attention to the second and third floors of the commercial section. After positive audience comments I concluded my talk with advice not to just look into shop windows, but also to the upper floors “as there is much to please you.”

Within a week I received a call from the chair telling me I was a “menace.” She claimed she agreed about the great façades, but in viewing them she had crashed into poles, signs and “old people.” She had fallen over mothers and strollers and off curbs onto roads while following my advice to look up.

I extend this advice to “look where you are walking” to your readers who are now undoubtedly paying more attention to Orangeville’s great updates.
Heather Broadbent, Caledon

It is a little disturbing that after having written such a beautiful piece about my store Aardvark Music & Culture that you refer to it in the article “Broadway Revival” as if it doesn’t exist anymore. It was not my choice to move my business, but it remains a vital part of our community.

Our apologies. We didn’t mean to imply Aardvark was gone. It’s a wonderful resource and still very much part of Broadway and the local music community. For those who want to know more, see the feature story on Aardvark in our summer ’13 issue. 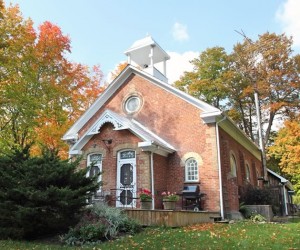 The decorative touches that set the Silver Creek schoolhouse apart from its plainer counterparts include buttresses along the side walls, a charming circular window above the main doors, and the buff-brick voussoirs that form a rounded arch above both the large side windows and the two smaller multipaned windows that flank the entrances. Buff bricks were also used to create a pattern of decorative quoins at each corner of the building. Photo by Pam Purves.

This article [“At Home in the Hills: Living with History” autumn ’13] brought me to tears. I was the fifth generation on our family farm just south of the Silver Creek schoolhouse on the First Line Caledon [now Kennedy Road] and attended up to grade 5 upon the closing of the school.

CBC did a film on the closing of SS#3 Silver Creek on their program called Country Calendar. I drove to Ottawa approximately 12 years ago to try and find the film in their archives to no avail. The producer’s daughter narrated the film, speaking as one of the students, and at that time did not realize it was on my behalf as I had the oldest family history at the school. If any of your readers have any contacts who may have retrieved the film from the archives, I would greatly appreciate finding out how I could obtain a copy.
Lyn (McBride) Morrow, Peterborough

I grew up south of Silver Creek School and walked a mile to school (uphill both ways) with my younger sister for many years. We were taught by Miss Flewellen and then by Mrs. Violet Cook. She was an amazing teacher. Our two older brothers also attended the school before us.

My siblings and I were the fourth generation of McBrides to live on the farm, and I know that my father and his seven sisters also walked that mile to school. I can only assume that as a boy, my grandfather and his siblings would have also been taught there.

I have many wonderful memories of my time there. There were about four students in each of the eight grades. Our father was a trustee for some time. At the end of grade 8, I attended Central Peel Secondary in Brampton, then Toronto General School of Nursing.

In 1971, after I was married, my mother and I visited Mrs. Cook near Belwood Lake to show her my baby daughter. She passed away shortly after that visit. I was always glad I went to see her. I am related to the Kidds referred to in the article. My cousin Kay Kidd and I were close in age and good friends during our time together at school. I am now retired from nursing and live with my husband in Collingwood.
Kay (McBride) West-Hagerman, Collingwood