I don’t think of myself as a hobby person, but I guess I am. Wikipedia lists 235 hobbies and defines a hobby as “an activity, interest, enthusiasm or pastime undertaken for pleasure or relaxation, typically done during one’s own time.” It divides hobbies into four main categories: casual (think crosswords and bird watching); collecting (such as coin and rock); competing (darts and polo); and observation (reading and travelling). 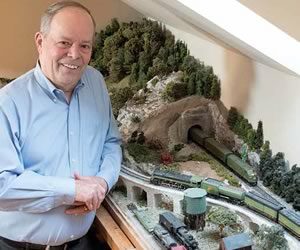 Retired broadcast journalist Hap Parnaby in his third-floor train room. The tracks circle the room through an elaborate landscape he handcrafted. Photo by Pete Paterson.

It turns out I’ve cycled through a lot of hobbies over the years. It also turns out I should really be thinking about spending more time on some of them, such as knapping. Ha, caught you, didn’t I? Yes, that’s a ‘k’ – knapping is defined as shaping flint.

You might recognize the name Tayler Parnaby, aka “Hap,” from his days at CFRB. He spent 23 years with the Toronto radio station, much of that time as a broadcast journalist. During the final 10 years before his retirement, he worked out of Queen’s Park. In 2011, he was named to Caledon’s Walk of Fame, and in 2012, he was inducted into the Hall of Fame in Orillia, where he grew up.

I had heard that Hap is a man with a hobby.

Now 75 and retired, Hap has been fascinated by trains all his life. His first tinplate train set was a Christmas present when he was 10. In high school he was a founder and enthusiastic member of the school’s model train club.

Hap may joke that his time in his train room is an “old fart’s hobby,” but he believes his life has been a series of events leading to the peace and fulfillment he finds there. The engineering training he received at Queen’s University, as well as his time in the control rooms of various southern Ontario radio stations, make it possible for him to design and build by hand the electrical boards that control his setup and send his trains – up to three at a time – either east or west. This is Canada, after all. No north-south train traffic here.

Though he carefully crafted some of his first railcars from cardboard, Hap has upgraded his rolling stock over his 20 years of collecting. A miniature 1954 CN transcontinental train was chugging around the perimeter of his third floor loft when I was there. A beautiful deep green colour with gold trim, the three engines, two baggage cars and four passenger coaches chugged along on 160 feet of mainline track and 120 more of yard track. Hap hopes to add an observation car to this set. You’ll never find socks on his Christmas wish list.

In model train parlance “HO gauge” refers to the specific ratio that governs how a model railway, including all the accoutrements, is scaled down from the real thing. The preferred gauge varies among enthusiasts around the world, but Hap believes that his HO gauge setup looks the most realistic. The tracks are on a <2% grade. To a novice, this means that the grade rises less than two inches for every 100 inches of track.

But it’s the intricacies of the setting that intrigue me. The trains glide alongside forests that showcase various types of trees, each individually crafted from furnace filter material. The miniature landscape also includes a tunnel and a trestle bridge – which Hap calls the “light-switch bridge” because, yes, it carries trains above the room’s light switch.

There are stone retaining walls and a viaduct, each section handcrafted from plaster moulds. Stones along the track are made with masons’ grout. There are miniature livestock, vintage trucks, and buildings he has constructed meticulously to scale, including a CP water tower, train shed and warehouse. A miniature lake is in the works.

Hap prides himself on the project’s unique wiring. His next step is to buy an Italian Arduino micro-processor and learn to program 40 new signal towers so things will run just like a proper railroad. Phew!

As I left the world headquarters of the Palgrave Consolidated Railway, it occurred to me that Hap’s hobby fits perfectly with his intention to retire to something. His passion for the model train world is apparent, and it satisfies his need to stretch both creatively and intellectually.

The age on our driver’s licence doesn’t necessarily reflect our stage in this life. By continuing to blaze our own trail, by seeking new things to engage in both physically and mentally, we are capable of changing the slope of our decline.

Hap has that all figured out.