A beginner’s ode to getting into the ballroom dancing groove.

The rumba is a dance of love. Experts insist it should embody the smouldering passion between a strong, Latin male lover and a flirtatiously coy woman. Full of sensual movements, the rumba, many say, is the sexiest of the ballroom dances. But not today. 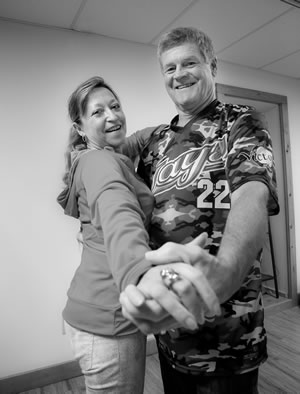 Hitting “play” on my Bose dock in the far corner of the living room, I know I have the first eight bars of Michael Bublé’s version of “Sway” to reach the centre of the room and slide the deaf, sleeping, 16-year-old basset hound out of the way. She doesn’t wake. At bar six, with no further prompts, my husband Tim emerges from the kitchen, takes my waist firmly and clasps my right hand in his left. As we look deeply into each other’s eyes, I whisper, “Five, six, seven, eight.”

Slow, quick, quick, slow – when the rumba rhythm starts to play, we step effortlessly into our box step. In our minds’ eyes, we’re nailing the hot Cuban motion, the knee-straightening shifts in weight, the figure-eight hip rolls, the swivelling action of the feet. There are no mirrored walls of a typical dance studio here to say otherwise. It’s all so right – until I count three box steps into our swaggering walk-through and Tim counts two. The magic falters. There are jesting taunts, belly laughs, then a more serious debrief. All fun aside, we want to get this right. I run back to restart Bublé.

With the opening of Caledon Dance Center in Caledon Village last year, scenes like this are happening in more and more living rooms across Headwaters. Shows like Dancing with the Stars have laid a foundation for ballroom’s growing popularity here and beyond. And though I’ve always marvelled at ballroom professionals, I thought the DWTS concept was deeply flawed when it premiered on American television in 2005. I felt almost embarrassed for the B-list celebrities who gushed over their progress and parsed judges’ comments in every episode. That is until I experienced the challenge and satisfaction of learning for myself. (I now watch every show.) Ballroom dancing is flat-out addictive – for all kinds of positive reasons that David Valenzuela and Corina Pirvuica of the Caledon Dance Center can you show you.

David is a renaissance guy. Although he focuses on Latin dances (the rumba, samba, cha-cha-chá, paso doble and jive), he is cool-headed by nature. When the music starts, however, his feeling for the music shows even in the flow of his walk as he counts in each dance. This national dance competitor, who left his native Mexico to take up an athletic scholarship at the University of Wisconsin–La Crosse, could have been a doctor or a dancer. As a student he excelled in math and sciences as much as in athletics. But the more you learn about dance, the more it makes sense that dance became his path of choice.

“Dance uses all parts of our brains and our hearts,” says David. “It requires us to be fully aware and in the moment.”

Beyond reducing stress and increasing serotonin levels, dancing is thought to integrate several brain functions at once – kinesthetic, rational, musical and emotional. All this improves neural connectivity, the number of neural pathways our brains can access to figure things out. 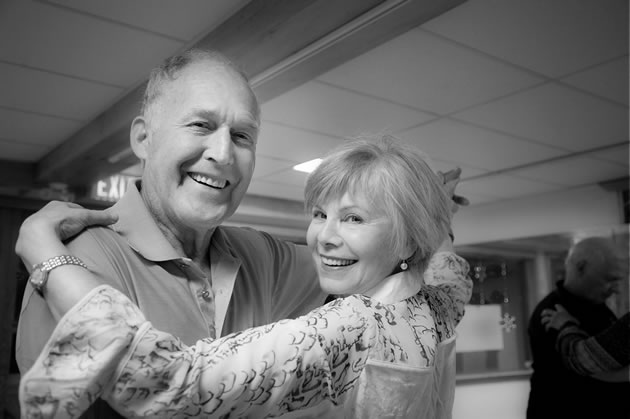 Indeed, a study published in the New England Journal of Medicine suggested frequent dancing may help stave off dementia. In the 21-year study, the complex connections that dancing sets firing in your noggin seemed to reduce the risk of dementia to a greater extent than any of the other activities studied, whether these were cognitive, such as reading, or physical, such as cycling.

Some experts suggest intelligence can be measured by our ability to make split-second decisions when we don’t already know what to do. And like lots of things, we either use intelligence or lose it, at any age. The ebb and flow of follow-and-lead social ballroom dancing is chock full of instant decision-making, reading a partner’s cues and responding spontaneously to unfamiliar music. All this exercises our brains, and this exercise may help keep us mentally sharp.

Even beginners experience this transformation. Early lessons – grappling with the rumba, keeping pace with the cha-cha-chá – felt like a wrestling match between the left and right lobes of my brain. But with more lessons, more dances, more practice, I was amazed at how this battle faded to a vigorous negotiation.

Add to that how David had us constantly switching partners in class. Everyone has different strengths and styles. Tim has a firm athletic hold. Gunter and Mathilde never forget a step. Kim and Bob take smaller steps, but they’re full of musicality and flair. We all had to adapt to each other, and with each class the learning became easier, the translating of mental notes to physical performance became more seamless. In short, I think we got smarter.

The fun of dancing makes you forget that it’s also great exercise. “Anything that makes physical activity more enjoyable increases the chance that you’ll do it more often, for longer periods, and therefore get more benefit,” says David. A former competitive high jumper, he incurred several stress fractures in his shins and finally gave up track and field for the dance floor. Now, at the age of 35, and after teaching and competing for 14 years, he says he eats what he wants, whenever he wants, and still maintains his trim athletic build. “That’s because dance allows me to be in motion almost all day long.”

Novices can reap these benefits immediately. At first, the focus is on mastering the sequence of steps, and then the beat and timing. Bit by bit, David divulges the art of follow and lead – the subtle guide of a man’s hand on the small of a woman’s back, or how to step back slightly to allow room for the woman to elegantly pass under the man’s arm. Eventually (we’re not there yet), the focus becomes styling and expression – the hip rolls, the arm flourishes, the powerful core and dropped shoulders. Inherent in progressing through all this are the benefits of increased flexibility, strength and endurance.

Both David and Corina, who were silver medallists in the rhythm category at the 2015 Canadian professional dance competition, have witnessed remarkable physical and mental transformations when all these elements come together. One middle-aged woman signed up for classes on the recommendation of her doctor. She was overweight and on a variety of medications for physical and mental health issues. “Over just a few years, she lost all the weight, no more drugs. She was competing,” says David. “Dance set her free.” 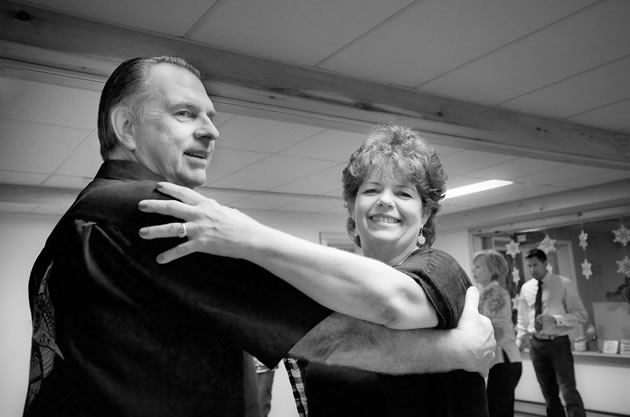 Romanian-born Corina, like David, experienced early in life the power of dance to bring people together. “My grandparents were frequent social ballroom dancers,” says the former Romanian national champion in both ballroom and Latin dances. “After watching them I was always dancing around in the living room. That is why my parents first enrolled me in classes.”

When David was growing up in his hometown of Veracruz, Mexico, folk dancing was central to most family and community gatherings. “Dancing was a big part of socializing. My mother forced me to take dance lessons as a young boy so I would participate,” he explains. “Once I realized how many girls took dance lessons, I didn’t need any more encouragement.”

With today’s fast-growing interest in ballroom, dance clubs and studios are opening up across the GTA. Still, even the ritual of our small Wednesday night class is a lot about this social connection. “It feels like a regular date night,” says our classmate Mathilde. “You’re focused just on each other, your steps and having fun.”

I agree. I recall one night when I arrived at class preoccupied by an assignment and short on sleep. Tim was mulling over details of a work proposal. We were in our own worlds. Once out of the car and on the dance floor, though, all this fell away. For those 45 minutes the world outside the glass door of the studio ceased to exist – and what a rarity that is in this hyperconnected world that always seems to pull at least a small part of us away from where we actually are.

Corina says this feeling is not unusual. One of her most rewarding experiences as a teacher involved a couple who, the wife confided, were on the brink of divorce. “The husband purchased a gift certificate for the holidays, and they came in together for the lessons,” says Corina. “The entire experience brought them close together once again. They told me it rekindled their romance.”

Back at Tim’s and my living-room practice, we’re on our fourth run-through. We envision the few brief moments that Corina and David actually danced the rumba together for our class. Breathtaking. As the familiar chords of the eight-bar intro to “Sway” play again, Corina’s philosophy of dance echoes – my body is my instrument; the dance feeds my soul.

I whisper, “Five, six, seven, eight.” The box step, the left-turning box, the inside turn, the outside turn, the underarm turn, a box-step sequence again. And just to show off in front of the still-sleeping basset, one deep dip. Finally, Tim pulls me upright. We pause eye to eye. Then in silence I stride back to my office as he does toward his soaking dishes. Workaday resumes, at least until the next time that rumba rhythm starts to play.

Caledon Dance Center focuses on social ballroom and Latin dance instruction with the opportunity to enter a competitive dance program. 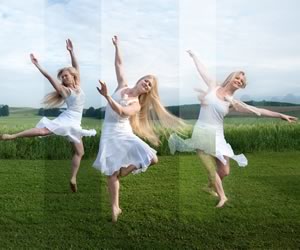 Get Up and Dance!

The Dufferin Dance Network brings dance to people – and people to dance.