When a Mother Dies

Although she misses her mother terribly, Tammi Langdon is glad they took the time to talk about the things that mattered before she died.

Leonard Cohen’s death last fall was a personal blow. I admit to feeling a spark of anger at him for making his final exit during such a politically dispiriting time. If ever we needed his comforting, leathery voice and words of wisdom, it was during the U.S. election fiasco.

As some of us ease into our later years, dealing with death becomes almost familiar. Though each passing is unique, some features remain the same – seeking solace in traditional rituals, support offered and received from family and friends, remembering … each becomes part of the memory mosaic that shapes our lives. 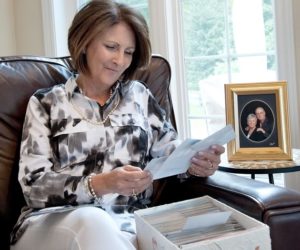 Although she misses her mother terribly, Tammi Langdon is glad they took the time to talk about the things that mattered before she died. Photo by Rosemary Hasner / Black Dog Creative Arts.

A simple “How are you?” at a cocktail party started an enlightening discussion with my neighbour Tammi Langdon about her mother’s recent death.

Tammi counts herself lucky as she reflects on the event. “We knew it was coming and we are so grateful we had time to prepare for it. Mum had struggled with health issues for over a year, but it wasn’t until the last few months, as we came to understand her health wouldn’t turn around, that we started to say our goodbyes.”

In her 80th year when she died, Janice Marie Campbell Beecroft grew up in a rollicking, boisterous family of eight children in a small town in central Manitoba. Right out of high school she joined the Royal Canadian Air Force where she was trained as an accountant, and met her husband Fred. She later used her accounting skills to help Fred with various business ventures during their nearly 60 years of marriage.

For Janice, a strong-willed, independent feminist with a taste for man-sized martinis and off-colour jokes, the constants in life were her husband, children, siblings, a wide network of loyal friends and her military connection, each of which she faithfully nurtured.

Janice had always been vociferous in expressing her abhorrence of institutionalized death. In the end, Fred’s constant care, with help from Tammi and compassionate Community Care Access Centre personnel, as well as a palliative care doctor, allowed her to take her last breaths at home, in familiar surroundings.

For Tammi, the thought of her mother disappearing from her life seemed to suck the centre from her world. She reflects, “The most difficult thing for me was coming to grips with the fact that the one person in this universe who was always in my corner was about to leave me. I knew I had things to think about in order to avoid thinking, ‘Shoot, I wish I could ask Mum’ after the fact, so I made mental lists, and every time we were together I asked questions. Mum and I had some wonderful, warm conversations during her last months, prompted by the knowledge that time for these discussions was getting shorter.”

Tammi adds, “I wanted to know I had apologized for everything that needed an apology, and assurance I had done everything I possibly could to live up to her expectations of me as a daughter.”

When Janice said she wanted to spend time with family and friends while she was still able to enjoy their company – adding wryly that she didn’t think she would feel much like chatting at her funeral – Tammi and Fred listened. A sister came to stay for several weeks, and extended family and friends were constant guests in the Beecroft home during her final months. For each visit, Janice rallied, in full makeup and pearls.

There was also paperwork to face. For this, Janice, the organized accountant, took over. She ensured that wills were up to date, and that Fred had access to her bank accounts, her tax files, where and how she paid bills, her investments and favourite charities.

Janice, Fred and Tammi were able to discuss funeral arrangements, the wording of the obituary and the changes that would soon be upon those left behind. Janice wanted all major decisions behind them when grief set in.

She departed peacefully, with Fred holding her hand. As Janice had envisioned, just one phone call to the funeral home set the final events in motion.

“You have to respect how she managed it all,” Tammi said. “Though it was very difficult at the time, being able to prepare for the inevitable was a blessing. And Dad is more peaceful now that he doesn’t have to witness her daily suffering.”

Leonard Cohen’s “Hallelujah” was included in the service. “I made sure that piece was played after I gave my eulogy,” said Tammi. “I knew it would do me in, and sure enough, it did.”