I hadn’t been in Jay Mowat’s century farmhouse for five minutes before he was sorting out where I could store books in his barn. “Oh, there’s stuff in there, but I’ll move it and I have a bunch of skids we could lay down and a tarp to keep the dust out,” he promised. “I’ll give you a hand, and I have a skid lifter you can have.” 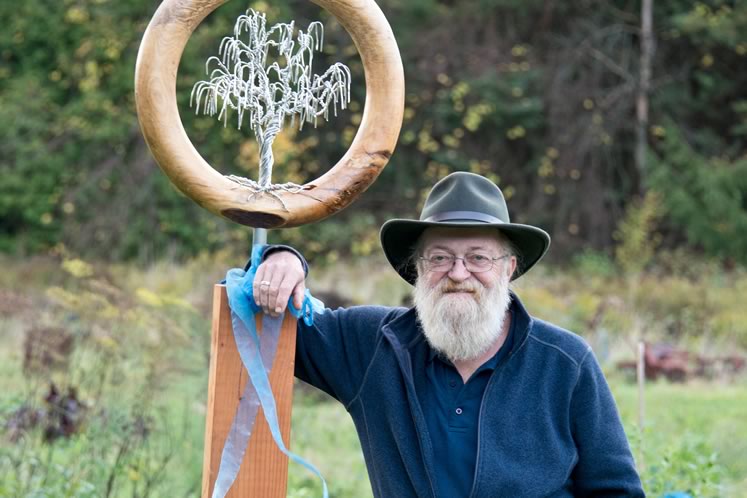 Jay Mowat with a sculpture by woodworker Jennifer McKinnon which his wife Clare gave him this year on his 65th birthday. Photo by Pete Paterson.

Had I come looking for storage space, his offer might not have been surprising. But I was there to hear about his life and work. Clearly, Jay is like that: helping out, partnering, collaborating – these are the qualities that define him.

When Jay and his wife Clare Booker left downtown Toronto and moved to Willow Creek Farm in Erin in 1995, he was an executive producer with CBC-TV’s Newsworld. Ten years later, when he retired from a long journalism career that began in his hometown of Edmonton, Jay used what he knew best to integrate into village life. He helped organize a group that set up a community radio station (91.7 FM).

Then he started a biodiesel co-operative, set up a market garden and satisfied his longstanding desire to make maple syrup by finding willing landowners. “I’ve been making maple syrup for years,” he explains, “but I have very few maple trees.”

Rather than rent trees, as producers often do, Jay approached landowners and offered to make the syrup, if they would help out. Today they collectively maintain 1,700 taps. “Everyone shares everything,” says Jay. “I collect the sap and farmers do shifts with the evaporator. We split the syrup 50-50.” If he rented trees, he’s pretty sure he could make more money – well, some money. But, he says, “I don’t want to do that. I like working with everyone.”

The apparent chaos of Jay’s Willow Creek Farm is deceptive. Check out his woodworking shop. Behind the bits of wood and piles of sawdust, his tools are hung neatly, each in its place. His evaporator is shiny clean and tidy stacks of stainless steel buckets line one wall.

The radio station did run into financial difficulties, forcing Jay and his group to unload it, but they have it back again. “It’s smaller, more community-minded,” he says. “And now it’s financially viable.” As he peers at me through eyeglasses overtop a cascading beard that makes it easy to believe he’s related to Farley Mowat (he isn’t), it’s evident he has learned from the radio experience.

These days he’s helping Clare with a co-operative effort that allows others to start their seedlings in Willow Creek’s pair of greenhouses. This initiative is morphing into a community garden. And when Jay isn’t digging, watering, planting and advising, he’s attending a monthly meeting of the town of Erin’s Environment and Sustainability Advisory Committee, or he’s encouraging residential developers to adopt Transition Erin’s green guidelines, or he’s persuading aggregate producers to implement sustainability practices – and then there’s the acoustic music concert series he and Clare organize.

He explains it all simply, “We planned well for our retirement and that gives us lots of freedom to have a positive impact on our community.”

Our interview over, Jay shows me a half-dozen places I can store my books for free.