Having a friend over, the excitement and anxiety of sharing your space, was such a thrill. 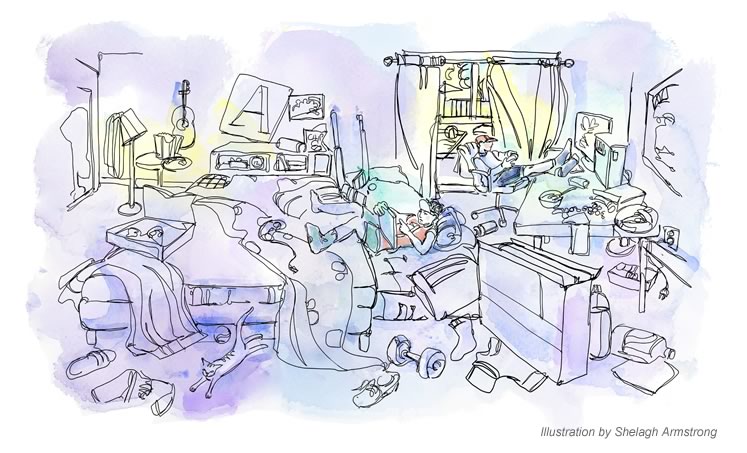 We are cleaning up from last night’s mayhem. I feel a little woozy as I survey the mess. There are drink glasses everywhere, dirty plates teeter on the counter, wet pool towels are strewn on chairs, and the house definitely needs an airing out. There’s a sweater I don’t recognize pushed behind a bed. I hold it up to my husband and raise a questioning eyebrow…

Okay, okay, it’s not what you think. What’s happening is simply a forensic analysis of a typical teenage sleepover.

It’s clean-up time. Blankets go back onto beds or are sorted for washing. The water glasses go in the dishwasher. Milk glasses pasted with cookie remnants go to the sink to soak. I gag a little, but I should be an expert in these investigations by now.

Next are the towels – how can two kids use so many towels? (Were there other kids sleeping over whom we have yet to find?) One dip in the pool by two kids has resulted in seven wet towels. Seven! We pick them up and sort them into baskets headed for the lab (laundry room).

On to the cat. Little Bowie has joined the family in the past few months. He’s no stranger to this sleepover game, and the kids have tried to frame him as the perp for the extreme late night/early morning hijinks. I look at little Bowie, purring in my hands as I pick him up (he has Automatic Purr built in, straight from the manufacturer). He looks innocent. Well, wait, his eyes close and his cat lips curl up – perhaps he was in on the racket. Were you part of this, little cat? He purrs on.

It’s time for a nap for everyone if you ask me, but no teen would ever admit to that. Okay then, time to pack up and get the sleepy friend home before things go sideways. What do kids bring for sleepovers these days, you might wonder? This one has a full-sized monitor in its original box, an Xbox, controllers and chargers. There may be a toothbrush inside the box, but I have my doubts (priorities).

As we drive into town, the hum of the road immediately begins to lull Adrian and his friend into head-snapping zone. For all the talking they were doing at 3 a.m., they are quiet now.

I recall how special it was for me to have a friend for a sleepover. Extra-late bedtime was one of the benefits, if there was bedtime at all. Often the already late “Lights out!” from my mom just led to hushed tones, but we still chat-chat-chatted til dawn.

Having a friend over, the excitement and anxiety of sharing your space, was such a thrill. It was a way to forge closeness, avoid boredom and set your own rules.

In my case, because I was always interested in decorating, we would make my room over into whatever our imaginations could devise – a dance studio, a cat maze, an art studio, a clothing exchange or salon. As a young girl living in the country, with a brother who was quite a bit older, I could escape the tedium of the long weekend, or the long summer, even if it was just for a day or two.

And going to a sleepover was also a thrill. What to take? Were PJs cool or just embarrassing past a certain age when your friends are sleeping in T-shirts and shorts? What about medicines or retainers, or the dreaded dental headgear – ugh, just one night off, please! There was also the thrill of seeing inside someone else’s fridge. Organized? Smelly? Interesting things you’d never tried? (Whatever you do, though, don’t drink the milk – I promise, it never tastes the same as at home.)

We arrive in town to drop off Adrian’s friend at his house. The boys have barely said a word and I start to think they are either in a coma or something has gone wrong. “Everything okay?” I ask. “Yeah, why?” responds Adrian. He explains everything is fine, but they want to be in their own space for a bit. I get it, I tell him. They must be sick of each other by now. “Nope,” he says.

Back home, we finish tidying and I think Adrian is going to conk out – until I see him setting up his room, wiping down his desk, and organizing snacks and water in front of his screen. “Aren’t you tired?” I ask. “And what about dinner?” “I’ll be late for dinner,” he says. “We’re meeting up to play online.”

Cleaning up now that the kids are back at school? Know where it goes! It’s everyone’s job to make sure we are sorting waste for recycling – after, of course, first making sure to refuse, reduce or reuse! Here are the municipal waste info tools for residents living in the hills. Check them out when you’re not sure which bin to put your waste in (different places have different rules).

Make change for our climate

Solving the plastics problem requires each one of us to make small changes in our daily lives. Every change helps, whether it’s adjusting the way we shop, modifying our habits, or simply refusing single-use plastics like takeout containers and drinking straws. Involve your kids in committing to doable, small changes that will have big impacts. 10,000 Changes is calling on Canadians of all ages to do their part! 10000changes.ca

Check Before You Choose

The Check Before You Choose website provides public health inspection results in Wellington and Dufferin counties and Guelph for businesses such as restaurants and other food establishments, before and after school programs, pools and splash pads, and camps and child care centres. A great resource if you are concerned about the places you go as a family, or if you are shopping for a service. checkbeforeyouchoose.ca

The name says it all — Bowling on Broadway is here! Not only bowling, this new hotspot has a little bit of fun for everyone. Orangeville parents Jay and Katia Marks launched the business as a boutique bowling and entertainment lounge at 276 Broadway. It features four bowling lanes, party rooms, retro arcade games, a licensed lounge serving fresh food, live entertainment and karaoke. Family-friendly and great for date night too. bowlingonbroadway.com

Give it a shot!

Gather up your teens and take them for some screen-free time at Far Shot Recreation in Orangeville. Far Shot’s motto is “Urban Games, Small Town Hospitality” and it specializes in coaching, games and leagues for axe throwing, battle archery, knife throwing and traditional archery. Keep an eye on their Twitter and Instagram for special events. They also take their activities on the road for private functions. Archery is offered for kids 10 and up; most other activities for 14 and up. Check site for details. farshot.ca