When Ontario began to ease its Covid-19 lockdown in May, and parks and hiking trails began to reopen, I grabbed my hiking shoes and was out the door so fast even my dog Frida had trouble keeping up. First stop? Forks of the Credit Park. Its kames and kettle lakes, and steep forested slopes that drop down to the Credit River are embedded in my DNA. I went early on a cool, overcast day and there was no one about. I breathed in the quiet air, noting the odd white trillium that was, like me, an early riser. Soon these harbingers of spring would be among a mass of ephemeral flowers and, as it turned out, among a mass of humanity too.

I was lucky to have the park mostly to myself that day. On the following weekend, cars overflowed from parking lots and lined both sides of access roads at a number of our local parks, the Forks of the Credit and Mono Cliffs in particular. For this was no normal Victoria Day weekend. It was get-out-of-jail weekend, complete with warm temperatures and bright sunshine.

The abnormally large crowds that flocked to nature when lockdown rules eased in May will be with us for a while given that most participatory sports and summer camps have been cancelled. The increase in users may test my desire for peace and quiet, but it’s wonderful to see so many new hikers – wonderful, but a little unsettling too. 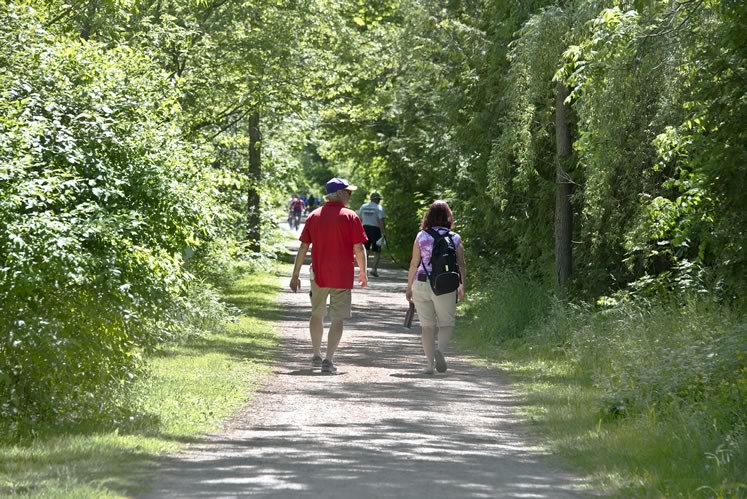 The Caledon Trailway was one of the many local trails that attracted an unusually high volume of hikers on the first warm, get-out-of-jail weekends this spring. Photo by Pete Paterson.

Unsettling because not everyone who has recently experienced our trails for the first time is like Paul Webster. A downtown Toronto-based science writer, Paul says, “I can get to a great nature trail in Caledon in 40 minutes.” He adds that having discovered both the beauty and urban proximity of the trails that crisscross these hills, hiking them will be part of his routine even when the pandemic passes. He won’t be alone in that.

But while Paul may be new to our trails, he’s a seasoned hiker. He knows about hiking footwear and layered clothing, about carrying water, and how to be a conscientious trail visitor. As a result, he and his 18-year-old daughter, Rosa, have great experiences and don’t inadvertently damage the environment.

I expect that Paul, like me, would wince if he saw fellow hikers limp by in flip-flops, dress shoes, even high heels, as I did on that fateful weekend. Blisters, I thought. Good footwear – at least sturdy sneakers – is to happy hiking what quality ear buds are to good music.

But footwear wasn’t the only thing that may have hindered the enjoyment of novice trail users. It was a warm weekend, but not that warm – at least not in the shade or in the wind. Every time I passed someone not carrying an extra sweater or jacket, I winced again, imagining what they’d do when the sun dipped behind a hill or if a cold wind blew in. Then there were the folks at the other end of the scale – melting under winter jackets. Why, I asked myself, don’t you tie that jacket around your waist? Or better yet, if you had one, why didn’t you grab a small backpack? Not only could you put extra clothing in it, but you could throw in a bottle of water, some snacks, sunscreen, a hat and sunglasses too.

Well, preparation and a certain level of fitness. It’s important to know your limits. Study the trail map in advance, and know when to turn back, so you don’t go home sore and blistered. One or two kilometres is probably a good starter distance for someone normally inclined to park as close to the mall entrance as possible.

Stopping for a drink of water or to take a photo are tricks I’ve learned allow me to have a break without letting on that I’m out of breath. And I leave my music at home. I listen to the birds, and look for squirrels and chipmunks. I admire trees and flowers. And I acknowledge other trail users. “Hello,” I say. “Good morning, have a great hike.” Because we’re all in this, out here, together.

The Bruce Trail Conservancy’s Trail Users’ Code is a succinct guide to trail etiquette. Here’s my version, slightly amended for the times: