Get your little one off to the best possible start with fresh, organic meals prepared at home.

We spent the first year of our son’s life in a Costa Rican village. Each week two young farmers trucked fruits and vegetables down from the mountains to sell along the coast. We’d stand in the road outside our house choosing from the colourful bounty – sweet potatoes, avocados, watermelons, bananas, cantaloupes, carrots, cabbages and Costa Rica’s sweet, small apples.

Those farm-fresh truckloads were the basis for our son’s first small meals when, around six months old, he seemed ready to tackle the whole messy business. Even the first thin purées were amazing to him. Banana mash was a favourite. He licked applesauce from his little ceramic spoon.  We fed him iron-fortified cereals – fine-milled rice, barley or oats – thinned with boiled water. And when he showed no signs of allergies, we carried on with proteins (beans, yogurt, chicken, tofu, fish) and fats (olive oil, butter). Making baby food at home seemed like the most natural thing  in the world. 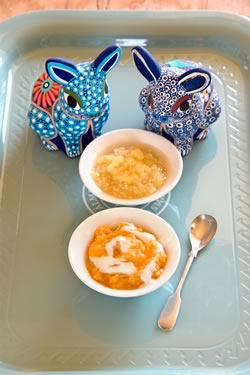 But to many parents “baby food” is something that comes out of a bottle or jar. The idea of making it themselves seems complicated and inconvenient. These days, thanks to some well designed gadgets, it’s a lot easier than you’d think. And, if you’re using fresh organic ingredients, the payoff is knowing your baby’s food is as pure and wholesome as can be.

Melanie Grime, a nutritionist at Harmony Whole Foods in Orangeville who has studied holistic nutrition, even made formula for her two sons, Benjamin, 5, and Samuel, 6 months, mixing organic goat, cow or soy milk with vitamin supplements. “Anything you buy that is packaged is loaded with sodium, sugar, or chemical preservatives to keep it sitting on the shelf,” she says.

Melanie suggests starting around six months with organic vegetables and fruits. “They have all the nutrients babies need.” Begin with watery, textureless purées, and introduce one new ingredient at a time so you can identify the source if there are any signs of allergies or digestive disorders.

Somewhere around eight months babies are ready for small amounts of protein (egg, meats, fish, poultry, tofu, legumes). A few weeks later, they can try dairy products like yogurt or fresh cheese and then fats such as olive oil or butter. Until the child shows dexterity in eating, it is best to purée, mash or strain most foods, but older babies love to handle soft finger foods such as toast, cheese, fruit or teething crackers. For some babies rich or spicy flavours – garlic, pepper, mild curries – are exciting, but many prefer bland fare. Little by little, babies’ meals become more complex until they are sharing at least part of the family meal.

When Heather Boston of Orangeville became a new mother, she knew homemade food would be healthier for her daughter Sydney, but she couldn’t face the extra work. “I was unsure of what I was doing and took the easy route on baby food,” she says, looking back. But she soon began to feel peer pressure from other mothers. When her son Calum was born, she decided things would be different.

She bought a small food processor and each week steamed or baked batches of vegetables and fruits, puréed them, froze the purées in ice cube trays, later turning them out into labelled freezer bags. “You take frozen cubes of two or three different foods, heat them up together and stir,” she says. A favourite with Calum was a combination of sweet potato or squash with green or red lentils.

And while we introduced cereals early with our son because they are nutritious and easily digested, not everyone agrees with this approach. Melanie says, “Babies don’t produce the enzymes needed to break down grains.” This can sometimes lead to allergies and intolerances later in life. She recommends whole, gluten-free options such as quinoa instead of commercial cereals that often contain added sugar.

She stresses organic homemade food is best for baby, but her advice is to put the guilt away if money or time is an issue. “Make the best choices you can to get the proper nutrients,” she says. “You can’t be perfect. Go for the 80/20 rule.” That’s 80 per cent organic, whole ingredients with some forgiveness for the other 20 per cent.

And as Heather says, “Keep it simple. I learned you don’t make fancy recipes for babies.”