Not just because it’s good for you and the planet, but because it tastes great too. 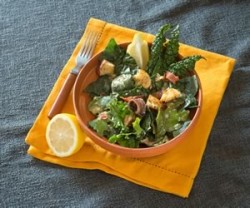 Once considered a mere filler in CSA (Community-Supported Agriculture) boxes, kale has moved well beyond its “Oh no, not more kale!” stigma. That’s because it is now recognized as one of the healthiest of all greens. Indeed, as an excellent source of vitamins K, A and C, and with impressively high levels of antioxidants and sulfur-containing phytonutrients, kale packs a serious nutritional punch.

Along with other members of the Brassica family, which includes cabbage, Brussels sprouts and broccoli, kale has been linked to cancer prevention. Including kale in your diet helps reduce cholesterol levels (especially when steamed), and aids in the body’s natural detoxification processes. To top it off, kale is excellent for your eyesight.

Despite its recent gain in popularity, kale has been cultivated in North America since the 17th century when it was brought over by English settlers. During the Middle Ages, it was one of the most widely consumed green vegetables in Europe, particularly in colder climate countries, due to its ability to withstand a hard frost. 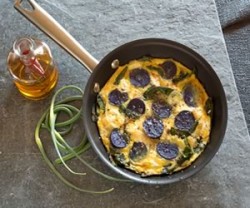 There are three main varieties of kale: curly, dinosaur and red Russian. They vary somewhat in appearance as well as taste and texture, but all are equally nutritious. Some people consider kale solely a cooking green as its leaves can be too tough to eat raw, especially when it is older. But believe it or not, you can massage raw kale until it is tender enough to serve in a salad. Start by lighting a candle to set the mood. Then wash and pull the leaves from the ribs of a bunch of kale. Combine the leaves with a couple pinches of sea salt and a tablespoon of olive oil, and massage it into the leaves for a few minutes until the kale feels softer and has turned a brighter shade of green.

Or simply toss the torn leaves with salad dressing and let them sit for at least an hour. The oil and vinegar will gradually tenderize the leaves. You can even leave dressed kale overnight in the refrigerator and it will soften nicely – unlike other dressed salad greens – without becoming mushy. Another reason to eat more kale.

And here’s one more. Kale is very popular with farmers and gardeners because it takes up so little room in the garden and can be harvested from the same plant all season long. Amy Ouchterlony, who operates Fiddle Foot Farm with her partner Graham Corbett, recommends waiting until a kale plant is well established – almost two feet tall with about eight to ten leaves, probably by late June – before harvesting. At that point, you can begin snapping off some of the bottom leaves. Be sure to leave the growing tips at the top, and your kale plant will continue producing right through until winter. It’s easy to eat more kale. 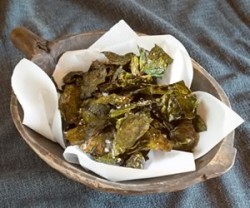 As Amy says, “This is one of those crops that really extends our local growing season.” In fact, this vegetable’s flavour actually improves and sweetens during frosty temperatures as the plant stores energy for winter in the form of sugar.

Amy, who has walked through a foot of snow to harvest kale on many occasions, says even when the leaves are frozen, you can let them thaw and they are as good as fresh. In fact, if you want to preserve kale for later months, throw the whole plant into the freezer and snip off leaves as needed.

So the moral of the story really is: eat more kale. It’s extremely good for you and it maximizes our local growing season. In the words of Canada’s first lady of song, “Kale, kale, kale.” 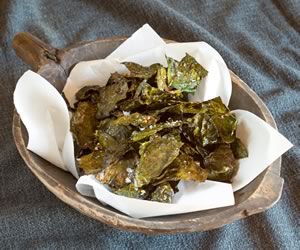 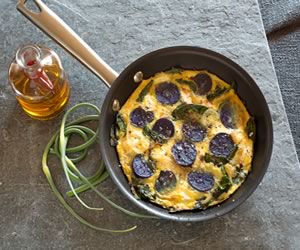 Frittata is an egg-based dish similar to an omelette or crustless quiche, enriched with additional ingredients such as meats, cheeses, vegetables or pasta. 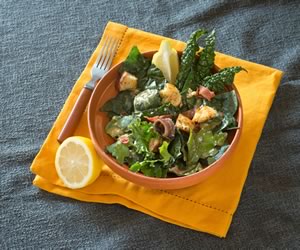 This healthy twist on a classic is my friend Rich Miller’s family recipe.