Not everyone can see the beauty in a neglected bungalow surrounded by lawns and woods that seem ready to swallow it up.

But it was beauty a Toronto advertising executive saw when he clapped eyes on an abandoned, slumping one-and-a-half-storey house for sale on a messy wooded property in 2012. Not even its empty and crumbling swimming pool could break the spell. 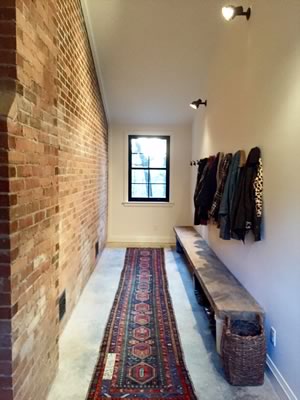 Instead of feeling a shiver as if he’d stepped into a horror film, his heart was filled with glee by the whole property. It was the same place whose laneway he had peeked up during a bike ride on Forks of the Credit Road years earlier – and never forgotten.

“I thought, ‘This is the house,’” he says. He remembers loving what he saw so much, he worried, “It would never be ours.”

While many buyers would raze the house and start again, he and his partner, an academic, were keen to nurture it back to health. She says when she saw it, she knew, “We will be its custodians,” preserving what they could.

They teamed up with architect Harry Lay to plot its future. Harry is also based in Toronto, but has a long history of working in Headwaters. At first it wasn’t clear how much could be saved, he says, but as they “stripped away the accretions” layered on the building, what was left was a classic Craftsman-style bungalow, a sturdy early 20th-century style known for its low-pitched roofs, deep overhanging eaves and long verandas.

“For them to look at this building and say, ‘We’re going to keep it,’ was a huge leap of faith,” Harry says. “They thought they could hear the building speak to them, and once I had a good look at it and got into it and underneath it, their hunch was absolutely correct.”

A few cautionary adventures and brainstorming design sessions later, the bungalow was on its way to being reborn as a bright, human-scale country home, somehow unpretentious and refined at the same time, and a new anchor in this couple’s personal history.

The soul of the house

After the owners welcome me into their sunny kitchen on a Saturday last fall, he shares a scrapbook of photos while she puts the finishing touches on what she calls a “big country lunch” for a gaggle of family members about to arrive. It stars a roasted pork loin from Caledon’s Heatherlea Farm Shoppe and homemade apple sauce. His mother is visiting and sits with us at a large black pedestal table.

This country lifestyle is relatively fresh to them. Although he had spent years skiing on winter weekends at Caledon Ski Club, neither had owned a weekend chalet or summer cottage before, despite sharing a love of nature you’d expect from two British Columbia natives. In fact, “we loved being in the city on summer weekends and having it all to ourselves.” 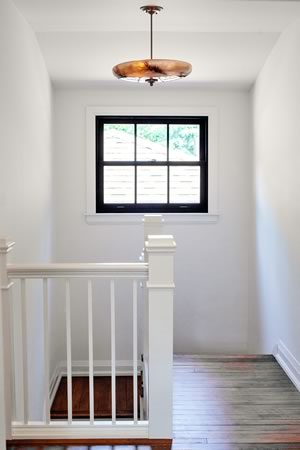 The second floor of the home is splendidly bright, thanks to its many unadorned windows. Photo by Nat Caron.

As a new couple when he spotted the property for sale, they knew diving into the project would be a formidable task. “It was an interesting test,” she says with a smile.

To start, the pair transformed a building on the property that was once a dog kennel into a modest little bunkie. “You can’t make this stuff up. We spent three or four years working like dogs,” she says. Jobs included clearing brush, landscaping the pond and around the house, and starting a vegetable garden. Friends came and helped the determined duo clear away 30 years of garbage before the real renovation began.

When it came to the house, they were interested in Harry’s knack for bringing old places back to life. “We wanted a modern feel, but one that was sympathetic to the soul of the house.”

Once they were down to the brick and stucco core, the trio began meeting on-site to brainstorm how the couple wanted to live in the house and what views to capitalize on. What they came to realize was their predecessors had thought this stuff through for them. The south-facing veranda, for instance, was exactly where it should be. The swimming pool was in just the right spot to catch the last sunlight of a summer day.

“The original house was built by someone who had spent time here,”  he says.

“There was a logic to it,” she agrees.

To maintain the fresh feel of the newly opened space, they started with clean white walls (Benjamin Moore’s Cloud White, to be exact) and refinished the wooden floors that run seamlessly throughout the main level. The construction team pulled up and stripped the original flooring, adding new wood to fill in gaps and staining it to match. Instead of tearing down the crumbling mantel, the team restored it using a traditional rope-style mortar detail to pull its Ontario fieldstones back together. “Why would you get rid of this?” he says.

The only entirely new space is the kitchen which bumps out to the north and looks like a conservatory from the outside. There are no upper cabinets and the greater part of three walls are all black-framed windows – even behind the six-burner stove.

“The windows were totally important,” he says. “Because it took three years to start the building process, we had time to think about the views, structure and layout.”

While there was plenty of room for a kitchen island, “they didn’t fall back on clichéd patterns,” as Harry puts it. Instead a handsome black oak library table bought on Kijiji beckons visitors to sit and linger.

Elsewhere, the updated space – about 1,400 square feet on the main floor and 900 on the second (with a small bedroom in the basement) – reads as equally spare, without being showroom sterile. In the dining room, for instance, the simple vintage Dutch school chairs around the table are counterpoint to a Victorian sideboard and two huge black and white pieces by American painter and graphic designer Robert Rauschenberg. Around the corner, a large 16th-century oil painting features a little girl pointing toward the kitchen.

The wins aren’t all visual – some are about touch. The deep-red screened porch doors, for example, are sized up to match new high ceilings, but they are lightweight “old slammers,” as Harry calls them, reminiscent of long-ago childhood summers. “Harry was great on details like that,” the owner notes appreciatively.

Harry credits the savvy, sensitive local tradespeople as instrumental on that count. Contractor Paul Janssen of JDC Custom Homes in Melancthon headed up the project, which also included Erin cabinetmaker Glenn Nelson who made the sleek kitchen cupboards. “Renovations are ten times harder than new builds, simply for the surgical skill set required to not compromise the building and to add something which heightens the good vibe of the original,” says Harry.

The couple remain inspired by the history of the property and are busy layering on their own chapter. Their kids are away at university, but the pair dabble in ski racing at the club, hiking and long-distance cycling, hosting a large group during an annual fall ride. 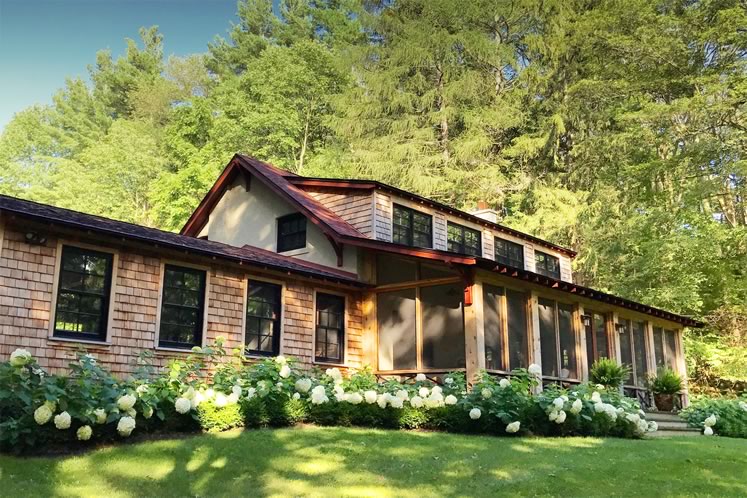 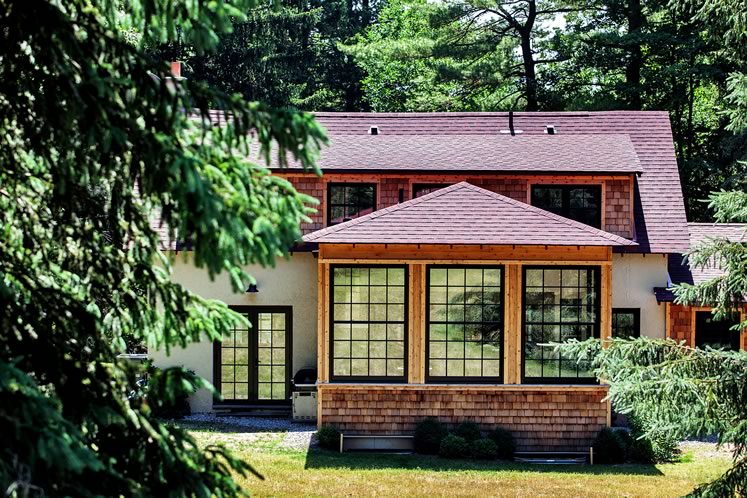 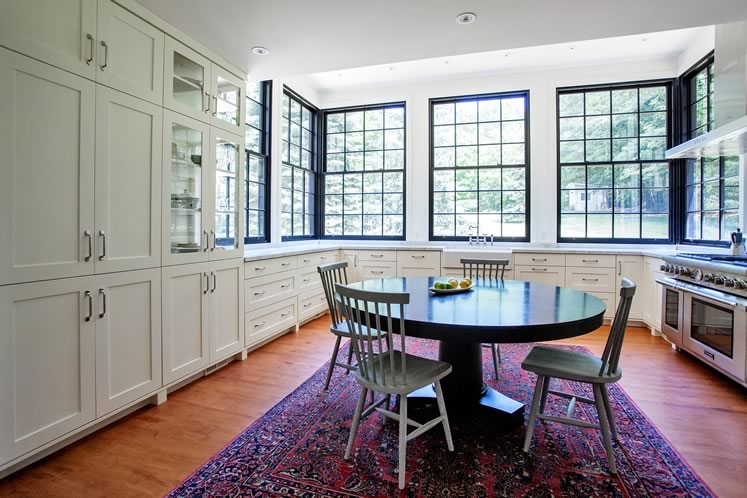 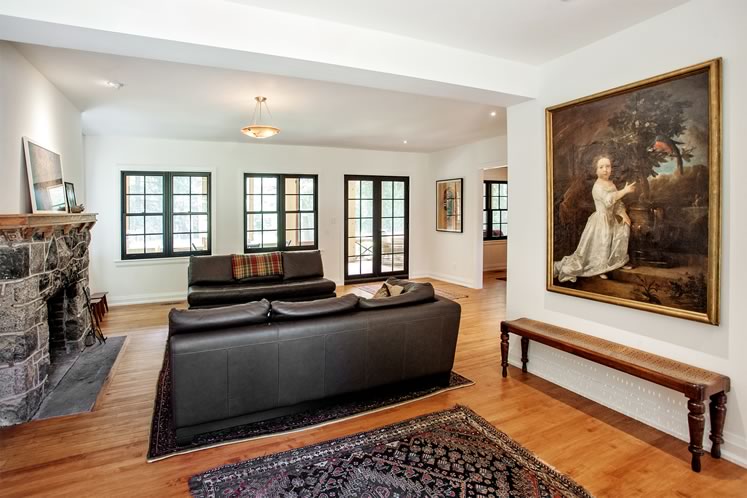 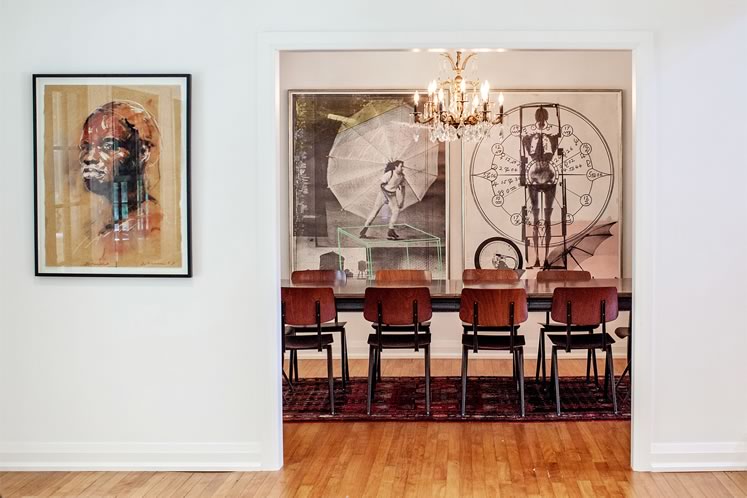 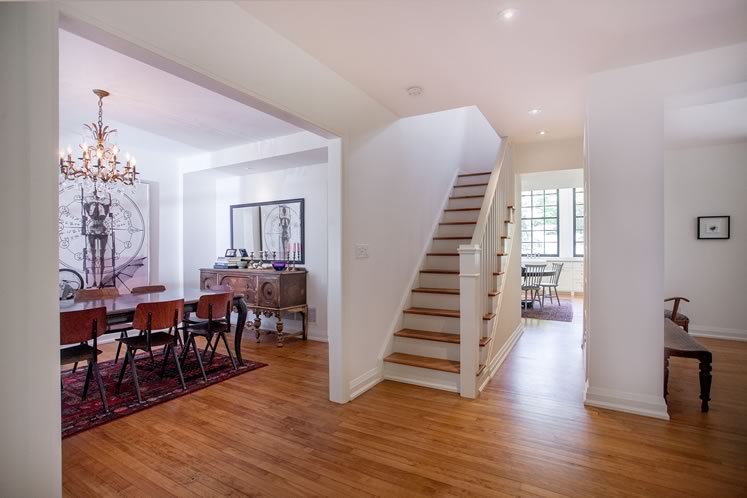 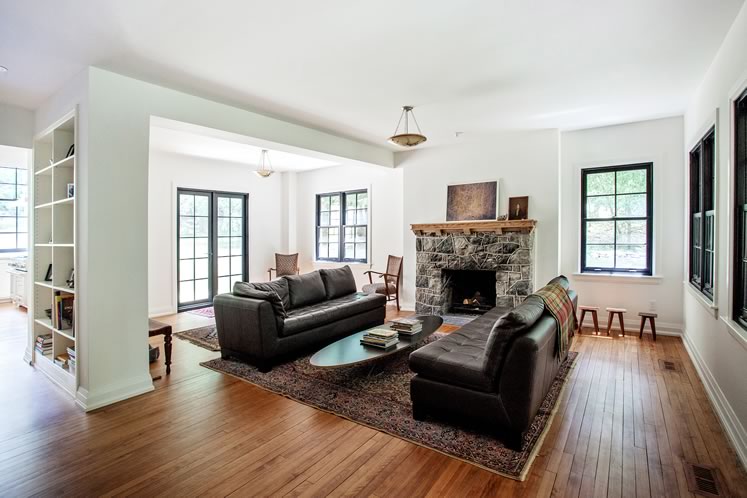 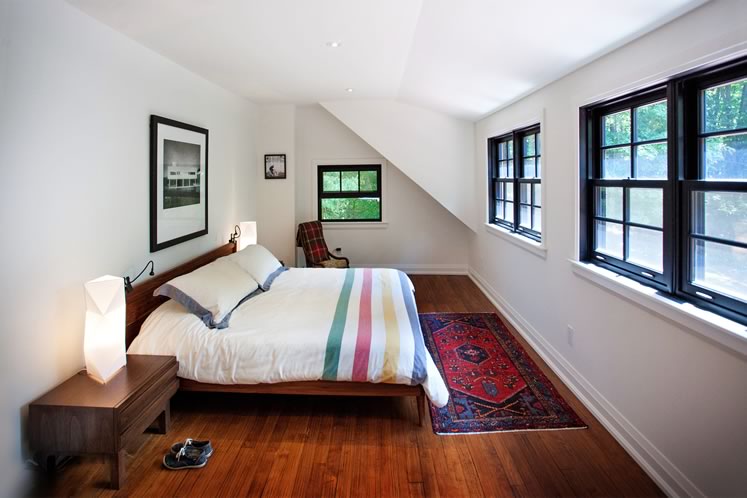 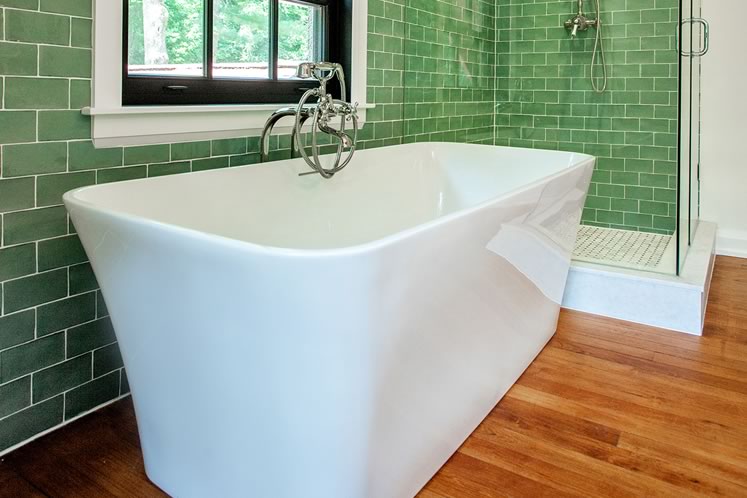 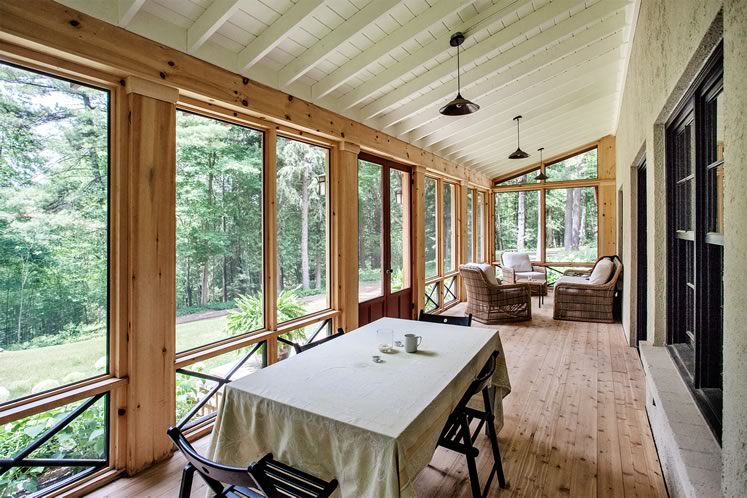 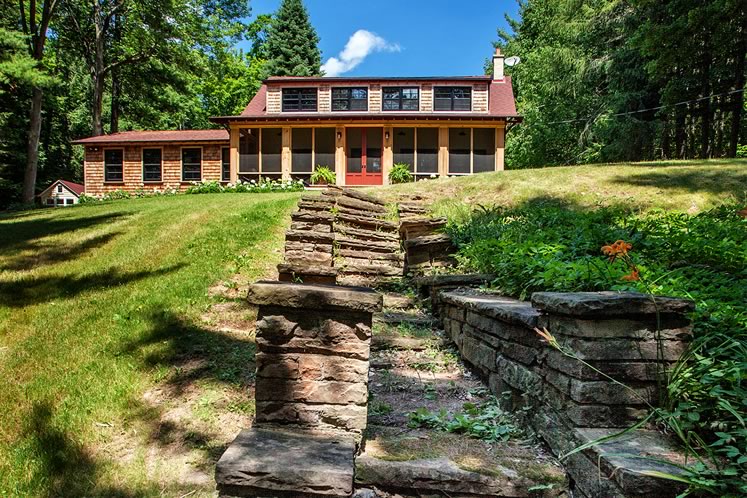 <
►
>
The only addition to the home is a show-stopping new kitchen, with windows on three sides, a vintage rug and a library table instead of an island. Photo by Nat Caron.

The family who built and owned the  house for many years gave them a watercolour of it, now displayed in the downstairs powder room. They were also given a 1950s black and white photo of a group of Caledon Ski Club friends posing outside the house on a summer day. They recreated the photo with biking pals last fall, substituting bike helmets and spandex for the ’50s shirtsleeves and pleated pants. “I like the fact the house has been used for decades by people enjoying Caledon,” he says. “We’ve fallen in love with the area.”

As we finish up an outdoor tour, he stands in the laneway he biked by five years earlier, only now the house before him is all straight lines, fresh stucco and new cedar shakes. On the front lawn though, the original moss-covered stone steps are pitching even more to the right than they did on that long-ago day. For this duo, though, the steps speak of time’s passage and will not be remade. 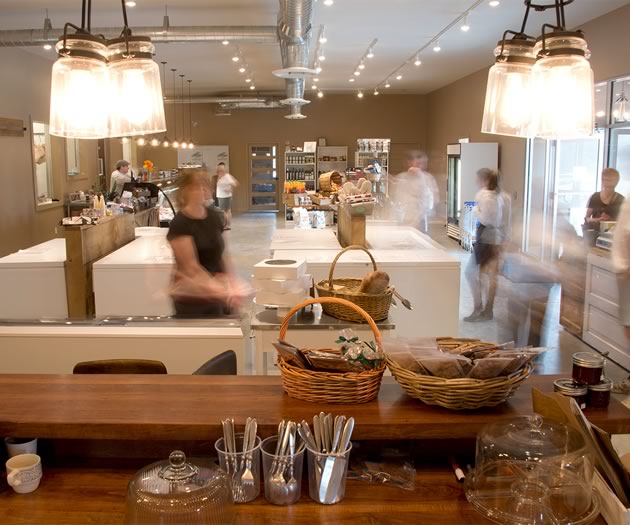 With its own livestock and in-house butchers, this Caledon farm reinvents traditional food production in a shiny new market. 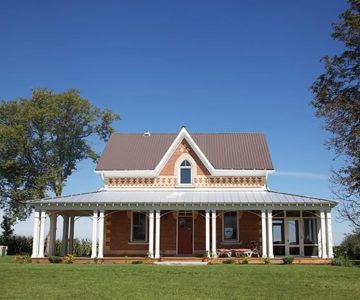 An Eco-revival for a Gothic Farmhouse 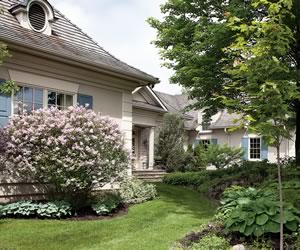 A European Manor in the Erin Countryside

The established trees shield the entrance to the house and provide natural shade where trillium, May apple and wild anemone flourish in the woodland garden. 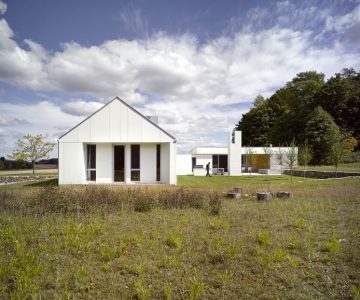 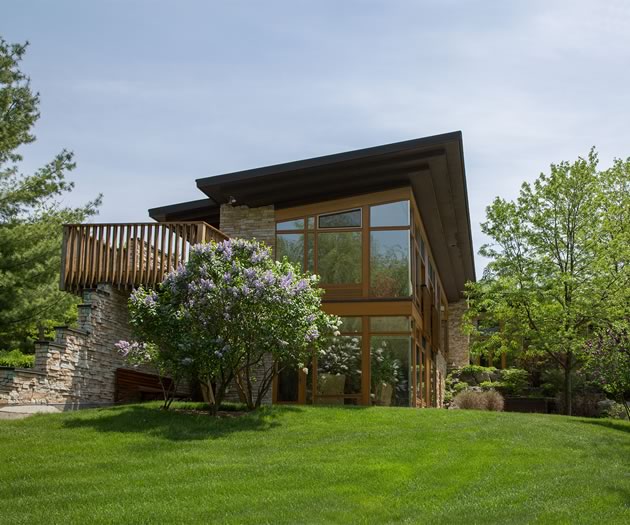 How West Coast Modern Made it to the Edge of Palgrave

Amid farmhouses and Victorian gothic, this sleek West Coast Modern design stands out in style. 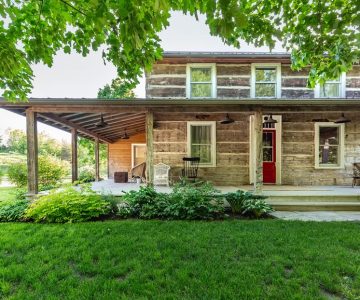